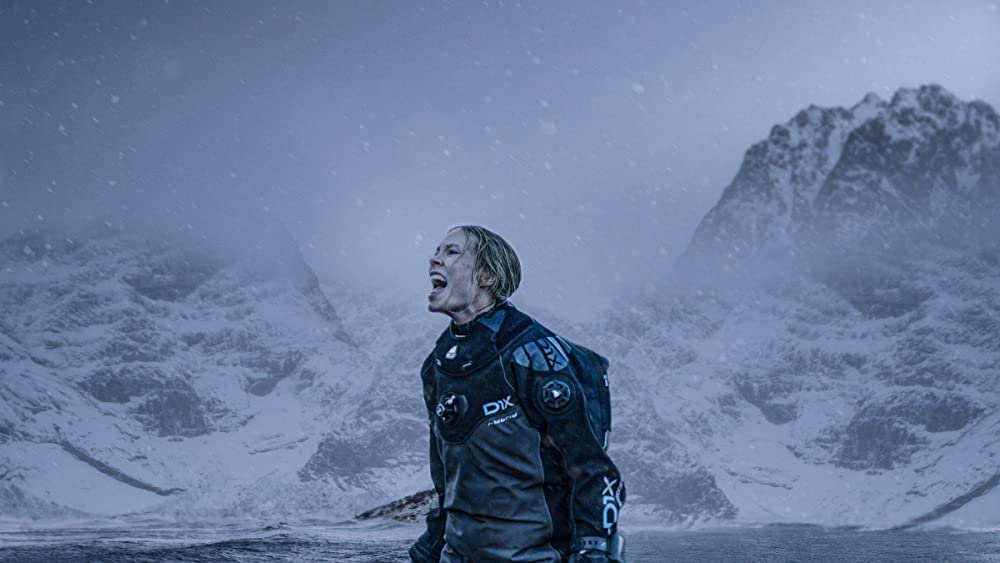 The difference between a survival horror and a survival thriller is simple: do those in peril turn on each other? That's what makes the simple and stressful Breaking Surface a perfect survival thriller. Two sisters, one trapped at the bottom of a Norwegian fjord under a fallen boulder, the other desperate to get her out before the air in her scuba tanks runs out. It's the simple elegance, combined with their sibling desperation, that ramps up the peril and the audience's will to see them get out of what seems like an almost impossible situation.

Of course, the trapped sister, Tuva (Martin), is the more experienced of the two, a professional diver sticking around for Christmas while her sister, Ida (Gammel), visits the family home for Christmas. She's headed for literally warmer waters, away from cleaning debris from around tanker propellers, while Ida's looking for a break from her collapsing marriage. She's still carrying more than a little baggage from a childhood swim that almost cost Tuva her life (the first of a series of tension-ramping sequences before the true crisis kicks in).

It's such a simple equation, and every moment is set up perfectly: not telegraphed, but pure Chekhov's gun (or rather, Chekhov's regulator valve). Everything makes simple, lyrical sense. Of course it's Tuva the expert diver pinned because that means she can provide the lean, air-limited exposition as she walks Ida through her increasingly desperate mission. Of course it's Ida taking increasingly perilous trip to the surface, risking the bends to rescue the sister she failed before. It's lean, effective filmmaking by writer/director Hedén that plays out exactly how you foresee, allowing for that little cringe of happy recognition every time the sideways glance at a precarious rock, or the pocket of air in a submerged tunnel, pays off exactly how you expect. There isn't a spare frame here, and cinematographers Anna Patarakina and Eric Börjeson (the latter handling the underwater sequences) capture the chilly fear in every gorgeous shot, in a landscape carved from slate greys and drenched in steely blues and murky dark depths. Even the location makes perfect, structured sense. There's never a feeling that the sisters are just in a diving tank somewhere: instead, the fjord and its banks feel like a single, unified place, so when Ida goes from shore to the sea floor it's more air gone, more of the clock ticking by.

In a genre that's become so dominated by shark attacks (not that there's anything wrong with 47 Meter Down, apart from its absurd sequel), letting the aquatic environment do all the nerve-jangling work is a welcome relief. Breaking Surface is a miniaturized version of another fabulous boulder-meets-water Norwegian flick, 2015's The Wave: an epic disaster movie on an intimate scale.