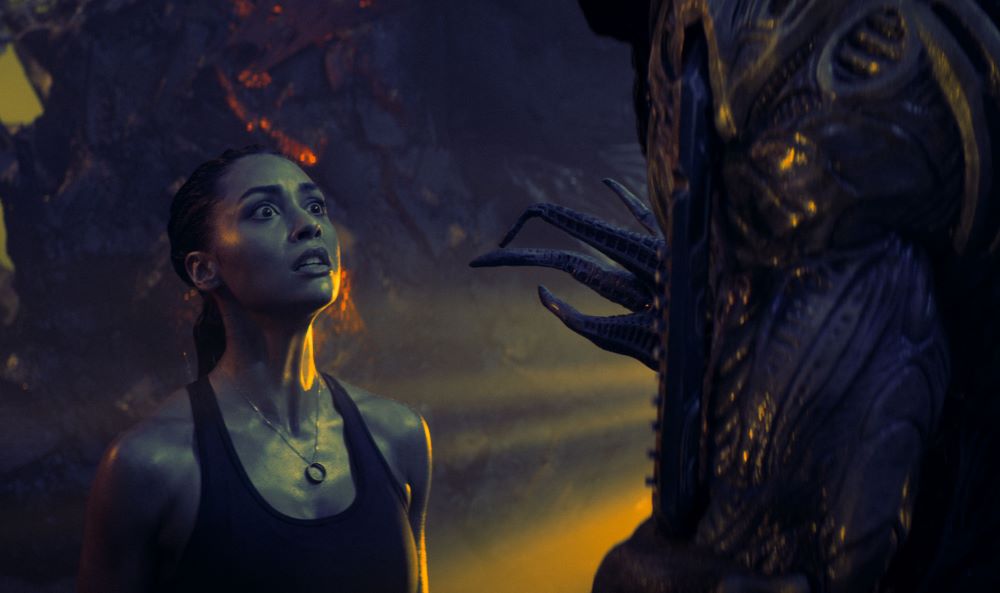 When The Last Jedi reinvented Star Wars as a deconstructionist reevaluation of its own story, a portion of the fan base was furious. They wanted more of the same. It’s hard for a franchise to completely shift perspective (who mourns for Halloween III: Season of the Witch?) but with the Skyline alien invasion story, the trick to watching them is to forget half of the last film - not because it didn't happen, but because it’s barely relevant to where you’re going. So just as Beyond Skyline turned away from the cliffhanger of Skyline, so the third film in the cycle, Skylines, manages to lose Frank Grillo’s creature-killer seemingly somewhere in Indonesia. Instead, the orphaned alien/human hybrid, Rose Corley (Morgan), is in the pilot’s seat – quite literally: Skylines opens where the last film closed, with Rose about to devastate an invader cruiser with a purloined battleship.

Only the battle doesn’t end quite the way humanity had hoped. The body-harvesting interstellar fiends are somewhat vanquished, but at a terrible cost. Fast-forward, Rose has disappeared, and Earth is in an unstable peace. OK, so maybe you do have to have seen the first two films. There are humans, and then there are pilots – alien biosuits powered by vivisected human brains. They’ve reached an understanding after the pilots were deprogrammed, but now a plague is sending the pilots mad.

Cue a classic “men on a mission” story as Rose is begrudgingly placed in charge of an interstellar heist. Target: a cosmic doohickey that the martinet General Radford (Siddig) tells her will somehow purge the virus.

Skylines (which has changed title from the unwieldy but easy-to-Google Skylin3s since its festival run) is a gleeful, action-centered mix of Aliens and This Island Earth, undemanding and entertaining with Morgan going toe-to-toe in punch-ups with Pilots and Harvesters. The story is formulaic, with the inevitable treachery in the team as visible as a supernova. An earthbound subplot involving Rhona Mitra as sardonic refugee camp medic Dr. Mal and James Cosmo as, well, James Cosmo (no bad thing) facing down a horde of deranged Pilots as they bear down on London serves to ratchet up the stakes; unfortunately, it’s neither long enough to stand as its own narrative strand, nor short enough to serve as a B plot (basic rule: If you have James Cosmo and Rhona Mitra, you use them as much as you can).

But for fans of the franchise, Skylines delivers the fusion of gore, aliens, and hard-hitting interstellar thrills they’ve been craving. The aliens look better than ever, Morgan delivers just the right kind of dry-witted action heroics, and Skylines takes the trip to the stars that the franchise has been promising.

Read our interview with director Liam O’Donnell about redesigning the Pilots and Harvesters for their first intergalactic adventure at austinchronicle.com/screens.