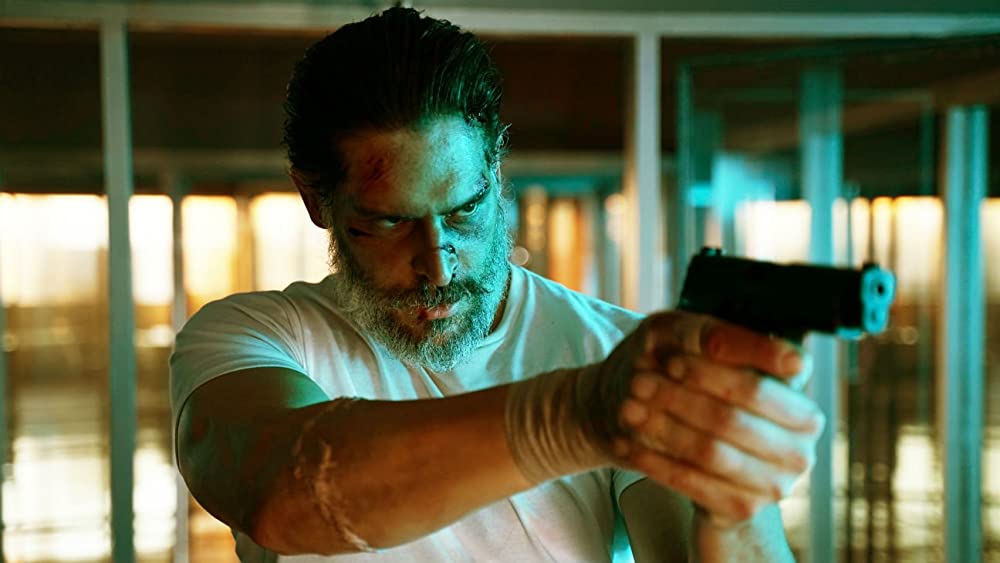 As big-budget superhero films either shuffle to streaming platforms or push release dates ever further and further back, smaller-budget revisionist takes on four-color conflicts of good versus evil are taking their place for a while. Not that "unheroic heroes" is a new idea (cf Kick-Ass, Mystery Men, Super, Hancock), last month André Øvredal's Mortal attempted to wrest the myth of Thor from Marvel's pantheon, and return it to its Scandinavian roots. Now Archenemy revisits the idea of the alien fallen to Earth to become our savior.

In this case, he's ended up in our parallel dimension: at least that's what the quite possibly delusional, but definitely homeless and alcoholic, Max Fist (Manganiello) believes. "A dimmer fucking universe," he grumbles, trying to convince anyone listening that he's a displaced superhero who fell through reality when he punched through subatomic structures to save his own world, Chromium. His old, possibly fantastical existence is seen through animated sequences, showing his conflict with his old archenemy, Cleo Ventris (voiced by Siemetz). The only person who even comes close to believing him is wannabe streamer Hamster (Brooks) whose sister, Indigo (Griggs), is a runner for a local drug lord known as the Manager (Howerton, scarcely-recognizable under a televangelist/used car dealer wig). She's sent to pick up a package from a hotel room currently in the grasp of a strung-out weirdo (Scheer, having fun chewing the scenery in a full-gonzo embrace of the overblown tone), and when the deal goes awry, Hamster cajoles Fist out of the bottle and back into action.

While alternative takes on Superman aren't exactly new (only last year Brightburn posited "what if Kal-el, but evil?") writer/director Mortimer at least throw in non-Martha-related references for some deeper cuts (Fist's arrival on Earth seems like a nod to Superboy literally punching a hole in the universe in Crisis on Infinite Earths). His hero isn't the normal clean-cut goof, either: Much as Ry Barrett blurred the lines between implacable vigilante and unstoppable slasher in Canadian revenge psychothriller The Demolisher, Manganiello throws a brutish edge into the moral certainty of Max's convictions. The Chromium version of his story is only seen in those animated inserts, with artist Sunando C clearly channeling more innovative comic books, and most especially the visionary abstract expressionism of Bill Sienkiewicz (the defining artist of The New Mutants, whose work was sorely abused by the recent film version – one big superhero title that probably should have shuffled to streaming). But while those sequences mimic the style of comics, they lack the dynamism and velocity of in-print superheroics. Mortimer, coming off his critically-acclaimed and award-winning debut Daniel Isn't Real, never quite strikes a tone or a pace that suits his tale of a (potentially) fractured mind.

Archenemy might have worked better if it was a straight adaptation of classic deconstructionist caper The Maxx. They're close kin, both centered a man living on the streets who may (or may not) have dropped between dimensions. It also wouldn't be hard to see Manganiello as lead in either, and he's definitely what centers Archenemy. His hobo hero catches the grandeur and grandiloquence of the superpowered, even as he stumblebums his way through skid row.

Magic Mike XXL
The boys are back in town