Alice in Wonderland and Peter Pan deal with the same issue: the impossibility of growing up. Lewis Carroll looked through a child's eyes at how absurd and arbitrary the rules of grown-ups are. In J. M. Barrie's story of the boy who never grew up, it's the bitter-sweet acceptance of change. Come Away, a miserable and mawkish mashup of the two, remembers that halfway through its final act, and by then it's far too late.

As recounted by the adult Alice (Mbatha-Raw, who really plays her as grown-up Wendy Darling), the real Alice and Peter were siblings, two of three. The Littleton children run and play in their idyllic English rural home in a pastoral nineteenth century, with father Jack (Oyelowo) making a living carving toy sail boats for the wealthy, and mother Rose (Jolie ... wait, Jack and Rose? Really?). When oldest son David (Yates) dies in a freak accident, it leaves the family shattered, and Alice (Chansa) and Peter (Nash) retreating deeper into their world of imagination. Or rightly embracing it. That point becomes increasingly unclear as they disappear into a demimonde of hints and nods to the two "source" (in the loosest sense of the word) books. Toy rabbits, London vagabonds, mad hatters, red queens: let's just say subtlety is not Come Away's métier.

In trying to force the two stories together, Brenda Chapman loses all the bouncy charm of her last feature, 2012's Brave, occasionally managing to add a gloss of childhood Victoriana to a very contemporary and flat tale of family trauma. Worse, Marissa Kate Goodhill's script thinks its so clever, as summed up with a horribly punny origin story for Tinkerbell's name. Small children will not get the refence, and adults will only roll their eyes. As for David's death, it's so oddly lyrical and, at the same time, heavy-handed, that adults will be unmoved and the littles slightly baffled. Worser and worserer, attempts to create ambiguity between real-life magic and young imagination just end up muddy and muddled. The neither/nor nature of Come Away, of who exactly it is for, means it never has the spirit to really touch the heart (and no, emotional manipulation is not the same as invoking real feelings). That imbalance shows how much Come Away owes, even if accidentally, to the truly wonderous Bridge to Terabithia and the equally-unjustly ignored A Monster Calls, both of which examined how children deal with grief through imagination with far more astuteness and tenderness.

After Benh Zeitlin's unfairly overlooked and truly magical Wendy, Come Away seems prosaic, its depiction of a mid-20th century version of Victoran England blandly uninspiring. That it has so little new to say, and replaces spirited fantasy with an overbearing glumness, is just disappointing. Also, someone near Angelina Jolie needs to tell her to stop doing her dismal fake-posh British accent. 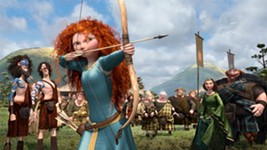 Brave
Although the animation looks terrific and the story features an immensely sympathetic heroine, Brave lacks the sheer imaginative oomph of prior Pixar pics. 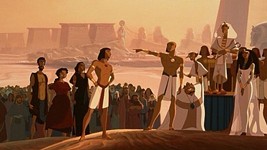