Sometimes you watch a film and you're genuinely astounded. Not about the execution, but on who thought this was ... not even a good idea, but an idea. Or rather, who thought that it was something other than fodder for a particularly high-concept Saturday Night Live fake trailer.

How else can one possibly describe a film best surmised as "Mel Gibson plays a surly, drunken Santa Claus who has to fight off Walton Goggins as a coldblooded hitman known only as the Skinny Man after an aggrieved spoiled child gets angry about the quality of his present."

Boiled down, it feels like a premise from a pitch meeting from a crew of Jingle All the Way fans that turned into an all-night bender/in-depth exploration of how Santa would actually pay for all of this (spoiler alert: military contracts). Plus, it ends up in the inevitable hyper-violent shootout as the skinny man and the man they call Chris duke it out in the Canadian wastes. No red suit, but there's a lot of crimson in the snow.

It's a weird, wild swing from the Nelms' brothers last feature, laconic rural noir Small Town Crime, and much thinner both in narrative and character. At the same time, they continue their run of making oddball little crime flicks (which this is, under it all) with big name actors getting to flex some unlikely muscles. Everybody is clearly having fun, especially Goggins who clearly is making up for never playing a badass in a Tarantino flick. Lurking in his lair, finessing his murdering skills, driving cool cars, and collecting every genuine gift from Santa he can possibly beg, borrow, or kill for, he throws himself giddily into the absurdity of it all. Meanwhile Gibson plays Father Christmas as a lovable grump getting burned out on how no one gets the spirit of the season anymore. Fortunately, he's anchored and reminded of why he does this by Jean-Baptiste as Mrs. Claus, a part in which she mixes a little steel into her cookie dough. Gibson's Santa (although no one around him ever uses the name) is oddly enigmatic, even if there's a surprisingly large amount of plot time dedicated to weird minutiae of life near the North Pole. Fortunately, Eric Woolfe, as workshop chief Number 7, impressively deadpans through material about the diet, sleeping habits, and naming of elves.

As far as revisionist takes on the Santa story go, Fatman is a long way from the whimsical charm of last year's Oscar-nominated Klaus. Yet for all its bizarre Spaghetti Western nihilism, sporadically going full Franco Nero Django bloodfest, Fatman has an oddly warm heart under its brutal exterior. Plus, if nothing else, watching Santa beating seven shades out of a sniper is a timely reminder to get off the naughty list. 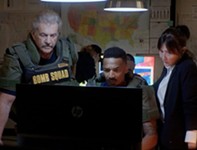 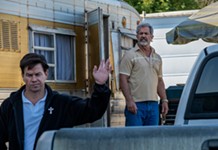