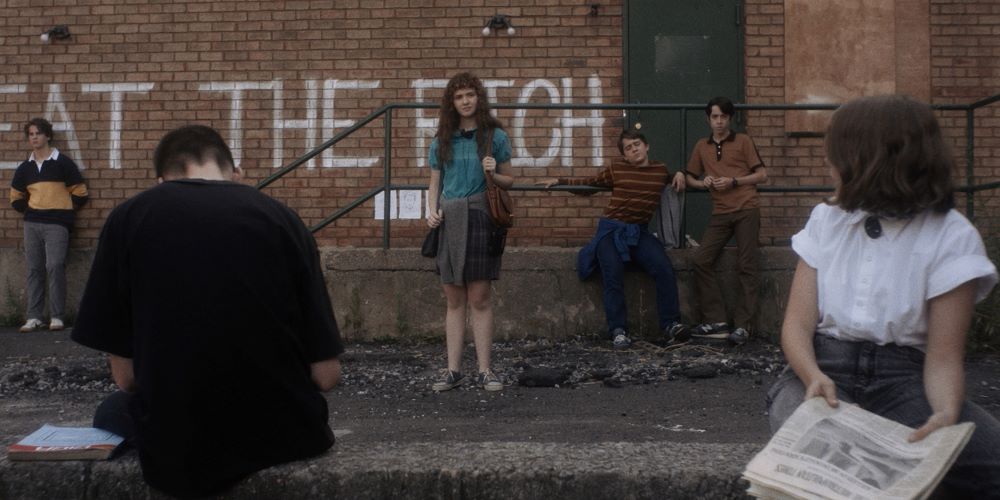 “Do any of our parents know we’re here?”

Spoiler alert: they don’t. Jeffrey Roda’s directorial debut is almost an origin story, a peek into the factory of Generation X’s disaffection. Misunderstood by their families, 18 to Party’s latchkey kids search for answers in each other. The stakes never reach the heights they could, but the angsty confusion of the youthful ensemble remains a welcome constant.

The film documents the plight of nine 8th graders in a nightclub parking lot, anxious to get into their first party. The opening shot reads like a John Hughes movie poster come alive, the camera sweeping through a horde of too-cool, denim-clad high schoolers, before we find our pubescent protagonists at the back of the line. They regurgitate their parents’ cynicism about Reagan and Russia, masking fears about their own insignificance and pondering if 8th grade really matters. The muted color palette brightens as the night darkens, like these middle schoolers have already pinned all their last hopes on the promise of one good night.

Ultimately, 18 to Party can’t commit to being either a slice-of-life character story or a plot-driven dramedy. Roda’s direction leans on angst more than his screenplay calls for. The Linklater-esque dialogue loses its effect when delivered at such a frenetic pace, undermining jokes that could have been laugh-out-loud funny. And when an intense climax arrives in the last act, the story isn’t far enough along to sustain much emotional payoff.

Strong performances across the board do manage to rescue the film’s heart and sense of humor. Standouts include Flood as Shelby, Richardson as Missy, and Freedson-Jackson as Lanky, each demonstrating the emotional restraint of actors beyond their years. It’s no coincidence that these are also the characters with the clearest backstories. With only an 80-minute runtime, 18 to Party certainly could have lost a character or three to further develop those left with loose ends. Still, the tight tableaus of Roda’s blocking give each of the nine kids a place on the screen (and among the memories of anyone who grew up in American public schools).

All markers of a first-time director are present here – 18 to Party needed more scrupulous eyes, but bears the palpable excitement of a new voice. It’s worth the watch for indie lovers and coming-of-age aficionados, with just enough moments of true clarity to expect a more mature, balanced appeal in Roda’s future.

18 to Party is available now on Alamo on Demand, and arrives on VOD Dec. 1.