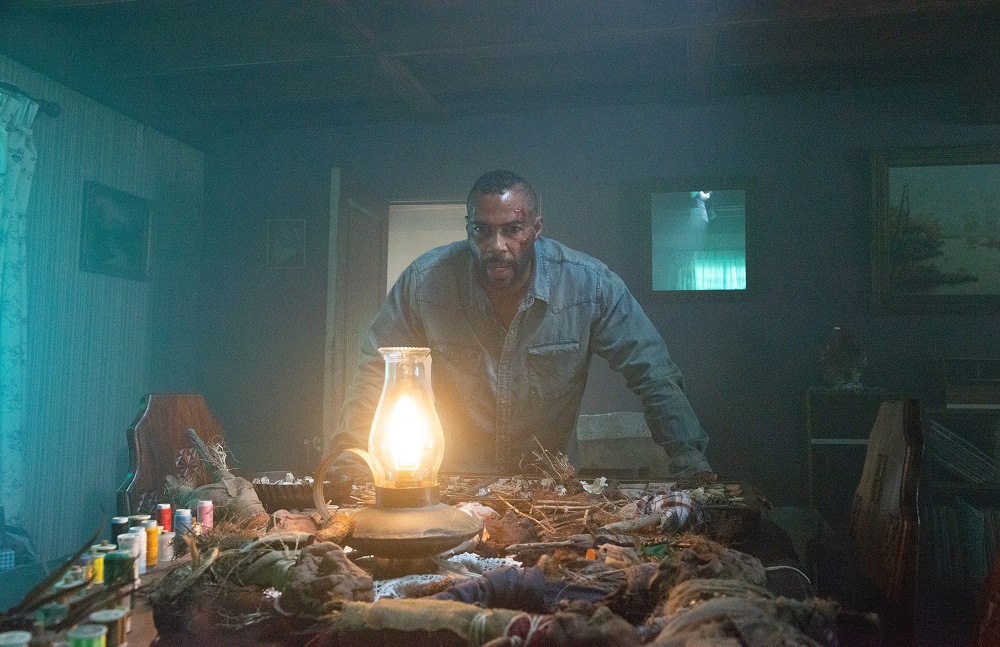 There's a long tradition of hillbilly horror, and they've all been bound by one overwhelming, consistent fact: The murderous, often cannibalistic backwoods menaces are almost always white. Gloriously gonzo Appalachian creeper Spell makes one big change – having both the urban family in peril and the horrifying hicks with malicious intent be Black – and that's a refreshing change to a genre that's felt moribund since about Wrong Turn 2.

Marquis T. Woods (Power's Hardwick) dealt with some deep, dark trauma from his daddy when he was a kid in Kentucky, all shown and implied by flashbacks. Yet now he's a high-price lawyer with a little private plane, a picture-perfect family, and a swaggering attitude displayed in a clumsy early boardroom scene in which he justifies destroying Black litigants in court because their attorneys are white. Fortunately, those big city sequences disappear as Marquis and his irksome family plummet to the ground in a plane crash, and he wakes up with in the far-from-tender mercies of Miss Eloise (Devine), a sweet-natured old lady in a town in the middle of nowhere who happens to practice a backwoods form of hoodoo. She's crafted a Boogity, an Appalachian voodoo doll that she claims will help heal him. However, Marquis isn't quite so sure that she's all that set on a cure for him.

Spell slams straight into the mid-rankings of Black horror on its conceit alone. In blaxploitation flicks like Sugar Hill and Scream Blacula Scream, and later heirs like Bones, voodoo and Black magic are often a tool for righteous revenge, a connection to power and traditions taken away from Black people. Spell instead taps into the urban and middle class fear of inbred yokels and backwoods locals inherent in white horror films since before The Texas Chain Saw Massacre, just with an almost completely Black cast. When Marquis' son (Burton) calls these Appalachian crazies "country," it's a loaded term that his mother later regrets castigating him about.

This tale of rural mayhem is an unexpected turn for scriptwriter Kurt Wimmer, who has previously mixed bizarro genre (Equilibrium, Ultraviolet) with studio action (Salt, The Thomas Crown Affair revamp). Here, for the first time, he's gone full schlock – and just in time for his take on another rural horror standby, his Children of the Corn prequel. Fortunately Mark Tonderai, who has been on a tear for the last five years as a genre TV director on everything from Gotham to Doctor Who, dives right in there with him. Wimmer's scripts have an energetic lunacy that previously no one other than, well, Wimmer has ever quite captured, and Tonderai goes full penny dreadful.

This means the cast has to go big, too, and Hardwick throws himself into the part of the embattled and maimed Marquis with all the subtlety of a brick through a window with corn sack curtains. That's exactly what the story requires, as meek and mild would be no fun, and he has to go toe-to-toe with Devine, who rants, raves, coos, giggles, and storms across the screen with glee and reckless abandon. Understatement is not in Spell's nature, as shown by one great, ghoulish visual gag of Marquis removing a nail that deliberately swoops over the line from grisly to gross to wonderfully absurd. This is OTT cinema, and fun because of it.

House at the End of the Street
This scary-house movie starring Jennifer Lawrence is a strictly middling nonshocker.