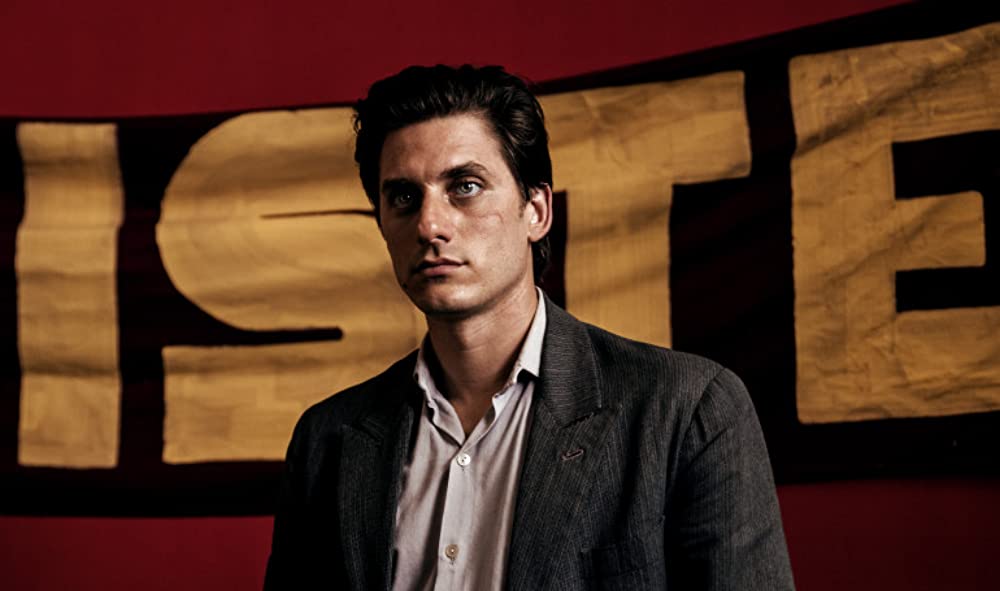 When you first meet young Martin Eden (Marinelli) in this Italian adaptation of Jack London’s relatively obscure 1909 novel bearing the protagonist’s name, he’s an uneducated working-class stiff, a handsome but rough-edged Neapolitan merchant marine with dirt under his fingernails and no ambition beyond a life on the sea. But upon a fateful introduction to the delicately bourgeois Elena Orsini (Cressy), a well-to-do ingenue and his intellectual superior, Martin is inspired to chart a new course. Starting with the two loaned books of Baudelaire poetry she encourages him to read, he obsessively begins to educate himself with the goal of becoming a writer befitting a status worthy of her. This chosen path is a trying one for the budding author, littered with dozens of publishers’ rejection letters and stained by a personal rebuff that nearly breaks his spirit. With time, the clear-eyed optimist deteriorates into a dissolute literary celebrity, ranting and raving about “isms” of every sort with all the pedantic conviction he can muster, an embittered victim of his own autodidactic success. Maybe a little knowledge can be a dangerous thing.

This uneven third cinematic version of London’s novel (with a fourth, starring Andrew Richardson, imminent) transposes the book’s Pacific Northwest setting to Naples and the surrounding Campana region. That change is frankly a mistake. While the promise of love initially motivates young Martin’s desire to improve himself, his nobler quest to transcend his social class works better in the context of an early 20th century stateside milieu, similar to similarly themed literary works of the day, such as Dreiser’s An American Tragedy and Fitzgerald’s The Great Gatsby. What’s more, the contradictions in London’s semi-autobiographical titular character work against him, or at least make fully empathizing with him difficult, particularly in the latter section of the film showing Martin near the bottom of his freefall psychological and physical descent. Martin is a social Darwinist who vehemently rails against any political or social movement he views as diminishing human individuality (his first public act of intellectualism: a speech opposing a workers’ strike at a union gathering), yet he penitently donates his new-found wealth to socialist organizations and the economically disadvantaged out of a sense of guilt. (Interestingly enough, London became an ardent socialist in the 1890s, largely out of his experiences travelling the world.) By the end of this Martin Eden, which is oddly embellished with real and imagined archival footage randomly inserted throughout, the focal character is little more than a puzzle, enigmatic rather than tragic.

Marinelli’s charismatic performance carries the day here, particularly in the early scenes in which Martin struggles to succeed as a writer and eventually finds his voice. (The 2019 Venice Film Festival awarded him the Volpi Cup.) Blessed with cheekbones to the Milan runway born, the Italian actor — his prepossessing allure recalls Alain Delon during his early career (Purple Noon) — exudes a beguiling mix of languidness and intensity the movie consistently fails to complement. Every so often, a spark in Marinelli’s mesmerizing blue-gray eyes flickers and you can imagine the passion that drove the man to his madness. In those moments, Martin Eden subtly flames, if only briefly.

Martin Eden is available now as a virtual cinema release.