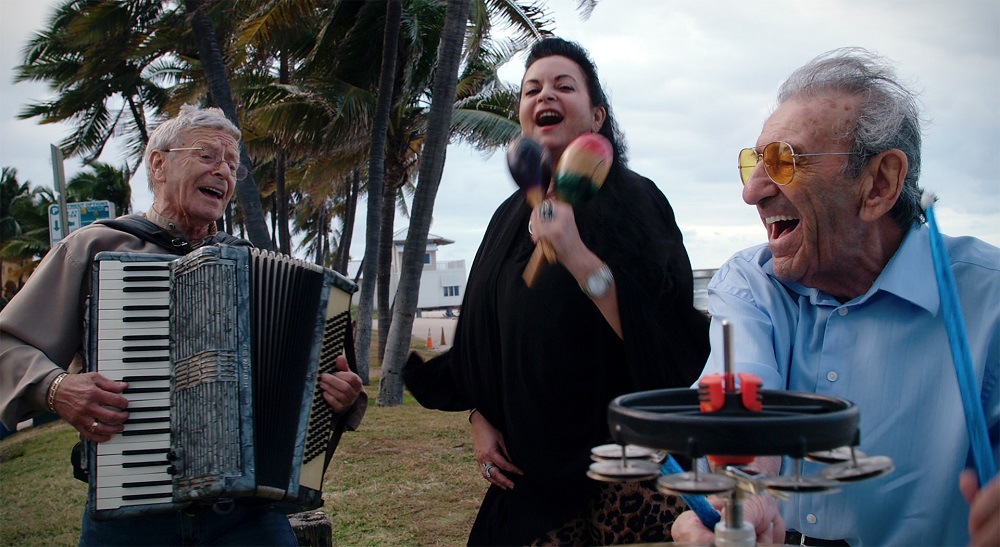 There's something reassuring about knowing that, no matter how old musicians get, they will squabble and yell at each other in the studio: even if they're in their 90s, and survived one of the most historic crimes against humanity of the 20th century. But Saul and Ruby, of Saul & Ruby's Holocaust Survivor Band, are still musicians, even if they've been through worse burdens than bad riders.

Drummer Saul Dreier and keyboardist/accordionist Ruby Sosnowicz first came to late-life stardom (and the attention of Tod Lending, the Oscar-nominated director of Legacy) via a short New York Times video. The two retirees in Coconut Creek, Fla., formed a Klezmer band in honor of Alice Herz-Sommer, a fellow musician and Holocaust survivor, and spent their twilight years performing – for their own enjoyment, to spread a message of optimism and resilience, and to eventually return to their native Poland, the nation they fled as Jewish refugees after World War II.

Theirs is such a remarkable and yet immediately recognizable story that it's a true shame that it never feels like we get to know them. Deier comes across as cantankerous, but considering that Sosnowicz is always backed up by his daughter/caregiver/backing singer Chana, it's hard to see the exact dynamics of their relationship. Even as they work their way through small gigs and high-profile performances at the Kennedy Center, all en route to a homecoming show in Warsaw, we learn a series of facts and anecdotes about them, but we don't get to know these two clearly fascinating men – or the details of their bond. That final trip to Poland, loaded as it is with emotion and memory, somehow never quite has the historical and personal heft that it deserves. Sometimes it even feels oddly intrusive, like when Chana pushes Saul for details about the cold-blooded murder of his grandmother, as they stand in the square where his family was gunned down by soldiers of the Reich. It's a meaningful moment that just feels awkward.

Lending seems to rely on the inherent poignancy of the story, without putting into it enough personal context. Fascinating details are almost glossed over, like what happened to the rest of the Sosnowicz family, that should add extra nuance to this chapter of the history of the fight against anti-Semitism. Considering that the duo had enough of a massive spat after the documentary completed that Sosnowicz has now launched the New (and Drierless) Holocaust Survivor Band, there's clearly a lot more story to tell.