If nothing else, director Brandon Cronenberg is very much his father’s son, and that’s a decidedly enthusiastic compliment. Following up on his Fantastic Fest 2012 debut Antiviral, Possessor (Uncut) seamlessly blends the unsettling body-horror that permeated the elder Cronenberg’s early-to-mid-career work in such genre-bending classics as Dead Ringers, Videodrome, and the The Fly with the trippy technophobics of eXistenZ while carving out his own borderline psychedelic niche in an already crowded and newly resurgent genre – thanks in large part to our current cultural chaos – of the hybrid highbrow sci-fi/horrorshow. Possessor’s hallucinatory tone and breathtaking ultra-violence will make even the most jaded genre fan squirm in their seats. The film’s ever-escalating, fever-dreamlike imagery is truly the stuff of nightmares and lingers in the mind as though it were an actual traumatic event. This is a movie that should come with a crimson trigger warning on its marketing materials: Post-Viewing PTSD may occur and sensitive viewers may choose to watch something less existentially disturbing, such as the Zapruder film accompanied by the Butthole Surfers on an endless loop.

There’s brutally visceral and punitively realistic gore galore on display here, but Cronenberg’s sophomore effort also deals in strikingly contemporary issues. Personal privacy and the paranoia arising from the dwindling availability of it via faceless, corporate data-scrapers, technology-enabled mind control and assassination in the pursuit of unknowable reasons by shadowy, pseudo-governmental organizations, and the erosion of personal identity and the accompanying mental decay all thread throughout the film like live wires throwing off giddily lethal sparks.

Set in Toronto in the near future (because it always looks like the near future in Toronto for some reason), a pale skeleton of a woman named Tasya Vos (the magnificent Riseborough of Mandy infamy) is employed by a mysterious corporation that uses brain implants to take over the bodies of other people and then uses these literally possessed persons to terminate, with ferociously extreme prejudice, strategically picked victims. Like a virus, Vos enters her unwilling host’s mind and body and seizes the reins of reason. Mayhem ensues. There’s a toll, however, in the form of some sticky, lingering memories from the people she briefly inhabits. Her superior, Girder (Leigh, also excellent), debriefs Vos after every assignment by showing her random objects and asking if they're actually her own, ahem, possessions. It’s a cunning way of determining the strength of the assassin’s psychological underpinnings. Have they come unmoored? Eventually Vos, who has an estranged husband (Sutherland) and a precocious young son who are seemingly unaware of the grisly specifics of her true occupation, is assigned to inhabit Colin (Abbott), a former cokehead and dealer now married to a wealthy former client. Somebody in his family, apparently, wants him six feet under. Vos, however, discovers that Colin’s mind isn’t as pliant as expected, and a literal battle between two wills trapped within one body commences.

Untangling that hazy, convoluted storyline amidst all the heavily stylized carnage and outright nihilism may be the film’s biggest drawback, but presumably that’s exactly what Cronenberg intended. All is surreal, illusory, and forbidding. Superbly lensed by cinematographer Karim Hussain (We are Still Here) and backed by a haunting, chilly score by composer and frequent Ben Wheatley collaborator Jim Williams, Possessor is queasy-smart near-masterpiece of psychotronic slippage. Like its protagonist’s risky psychogenic recollections, it’ll stick with you whether you’d like it to or not. 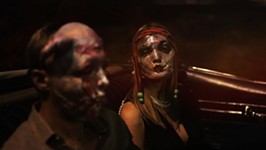