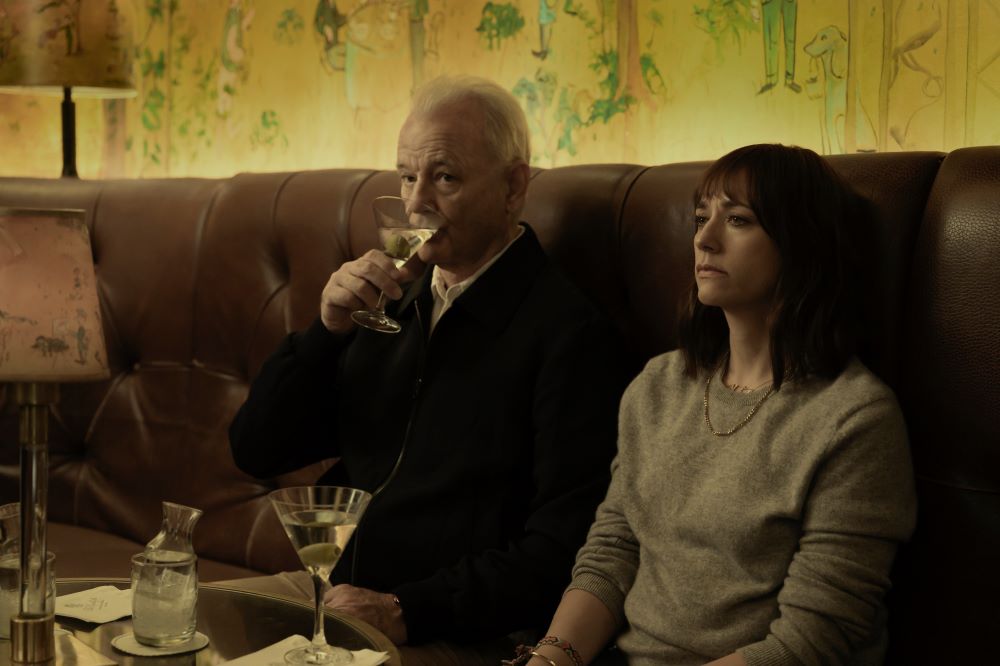 Writer/director Sofia Coppola shifts into a comfortable narrative register with this light romantic comedy that stars Rashida Jones and Bill Murray (both terrific). Unlike her period-set films The Beguiled and Marie Antoinette or her L.A.-centric works The Bling Ring and Somewhere, On the Rocks seems more of a piece with Coppola’s sophomore film Lost in Translation, in which two protagonists share an unconventional bond. The bond this time is between Laura (Jones), an NYC mother of two who confides in her bon vivant father Felix (Murray) when she worries that her marriage to her workaholic husband Dean (Wayans, surprising in a dramatic role) is going down the tubes.

The film’s succinct opening provides the set-up for Laura’s newfound fears. A father’s cautionary words to his daughter about never giving her heart to any boys but him forms the film’s preamble. That memory is followed by scenes of a happily-ever-after wedding and après-ceremony skinny dip. That quickly fades to the present, in which Laura and Dean are living comfortable lives in a Soho apartment with their two young, adorable girls. Dean works tirelessly at some unspecified venture for which he is constantly traveling, while Laura stays home parenting their children and unsuccessfully writing a book for which she already has a contract. We can tell by her demeanor that she is slightly bored with the routine and is drifting further away from Dean’s more glamorous world of start-ups and go-getters. One night, Dean comes home from a business trip in the middle of the night, still groggy from the Xanax he swallowed on the plane, and crawls into bed and then clutches his wife but recoils when he hears her voice. That moment is the catalyst for Laura’s doubts about her husband’s fidelity, a concern that she brings to her father Felix.

A world-traipsing former art gallerist who still finds handsome women in dark corners who might want to sell him a Hockney, Felix is a role custom-made for Bill Murray. The character is an unrepentant Don Juan, unable to resist flirting with every woman with whom he comes into contact, and strongly believes that there is a natural imperative that causes men to be non-monogamous – just as he was with Laura’s mom. Yet Felix can charm men, too, as demonstrated in a madcap sequence during which he sweet-talks a patrol officer who wants to take him into custody. Because of his philosophical position, Felix is convinced Dean is cheating and entreats Laura to join him in tailing Dean. Escapades ensue.

The story is slight, but in Coppola’s hands the film is infused with small moments that provide gateways to deeper emotions: i.e., while Laura lies face-down on her bed, a nearby Roomba busily clanks into walls; the daily encounters at her daughter’s school with another mother (Slate) who prattles on about an affair that started during Hurricane Sandy. Barbara Bain and Kelly Lynch delightfully pop up in small roles and a pertinent riff from a Chris Rock special adds resonance. On the Rocks is partly a love letter to New York, which is often pictured in its nighttime glory, and in that way the film reminds me of Martin Scorsese’s After Hours. A more recent comparison, however, might be last year’s Marriage Story, which also takes matrimony as its topic, although in a completely different tenor. On the Rocks is light-hearted and, ultimately, more a story about a girl and her father. The good and the bad of that parental legacy and the task of disentangling from it forms the subtext of On the Rocks. 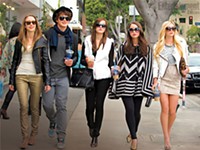