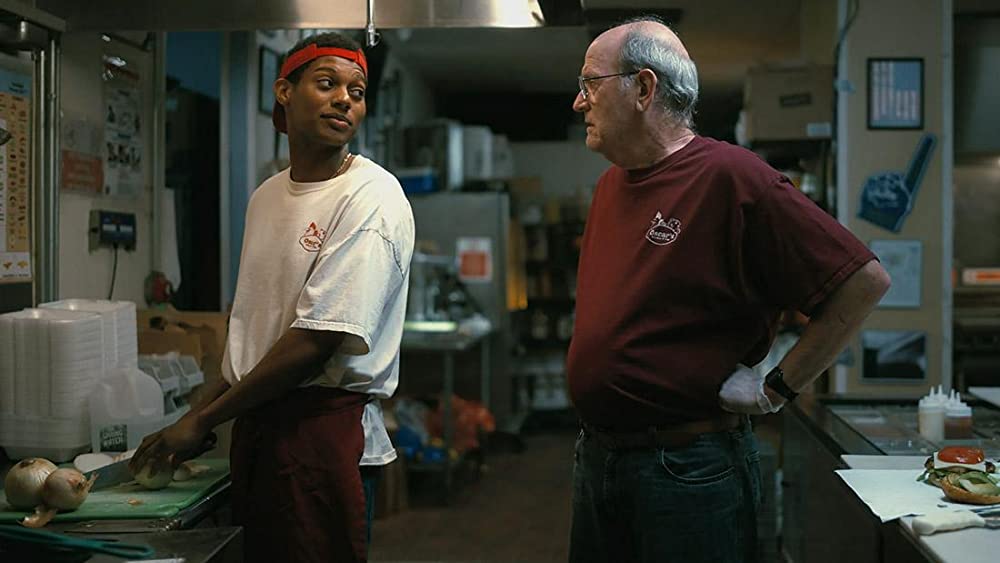 When do you go from having a job that you hate to it being the only thing in your life? That conundrum weighs heavy on Stanley (Jenkins). After 38 years at Oscar's Chicken and Fish in a non-descript street in suburban Chicago, he's made the best of a not-so-great situation. But then, who hasn't at some point? "Look at Brett Favre," he tells Jevon (McGhie), who is suddenly realizing that he may well be facing the same kind of decades of grilling flavorless patties, giving advice to smug highschoolers, and trying to make ends meet off a salary that will never keep up with inflation.

Writer/director Andrew Cohn's sly and fascinating script takes its well-worn beginnings and then weaves in a commentary on what it means to be at the bottom in America. Stanley never took the time to really think about his position, and now will forever live with the consequences: Jevon talks a good game about the structural and racial iniquities built into the system, but phones it in at work, and blames customers when they get mad about being served a frozen burger. That Stanley has to train Jevon to be his replacement feels like an indignity – not because he's being replaced, or any overt racial animus, but because he thinks the young man should care about the job. Jevon treats it like it's beneath him – which, at a certain level, it definitely is – but that doesn't excuse his dismissiveness to Stanley. Meanwhile, everything about their interactions is skewed by class and race, by presumptions and history, and an old neighborhood wound that's always in the background, raw and pulsing.

It's another tour de force performance from Jenkins, in the same week as his headturning performance as the pater familias of a clan of grifters in Kajillionaire. He doesn't weigh Stanley down with an easy-to-depict burden of woes and regrets, but instead shows the kind of guy that has only survived by keeping his head down and never looking beyond his narrow lane. It's a portrait of a stunted man that never feels incomplete or a pastiche, and somehow Jenkins is always capable of painting small men right out to the corners. His performance is built of tiny tics, like the way Stanley always tries to turn his wheezing breath (too many years cleaning out too many dust-gunked grease traps) into a giggle, like he's hiding his own infirmity from himself.

That he plays so well off McGhie (himself pulling double duty this weekend here and in the Shaq-endorsed Foster Boy) is a testament to the ease with which both men, and Cohn, rely on understatement and a lack of communication to capture a modern American divide. There are no dramatic bursts here, just two men grappling with the context of their lives, and that's what makes it so affecting.