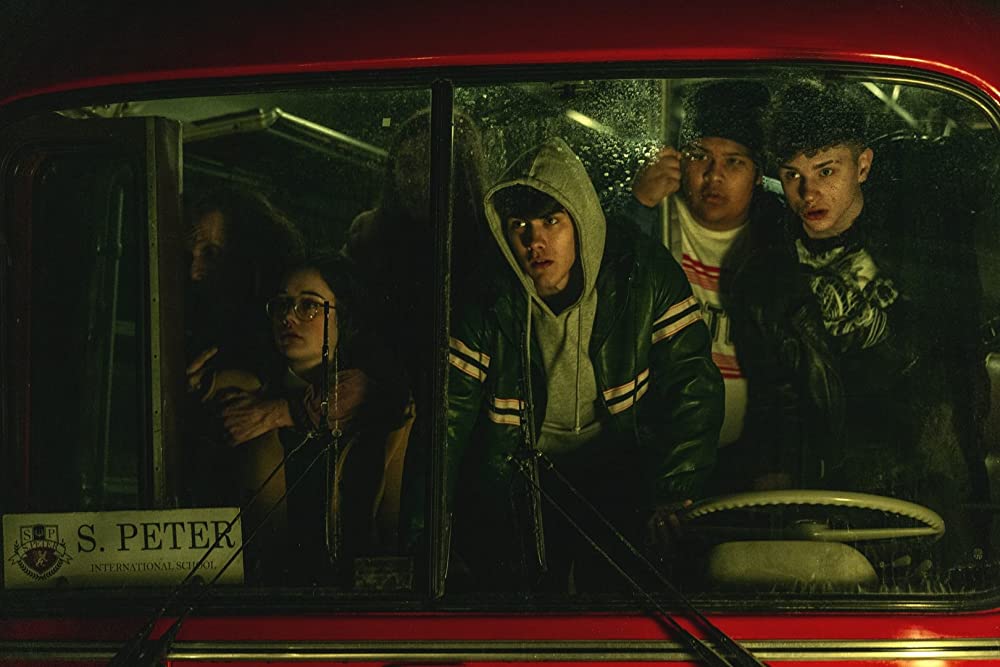 An Italian-lensed horror/monster quickie that most likely found its way into the U.S market thanks more to the coronavirus pandemic than any honest bloodcurdling scares, Shortcut has the feel of an R.L. Stine knockoff that probably would’ve worked far better at a quarter of its 80 minutes running time.

Goosebumps – apart from a couple of short, sharp shocks – are in short supply and are sorely needed to prop up a storyline that makes true fans of Italian horror long for even a tease of the twisted touch of titans of the genre like Michele Soavi or Dario Argento. Instead, director Liguori cobbles together bits and bobs from better films, hitting most if not all of the genre tropes with all the subtlety of a particularly lame episode of Scooby-Doo, Where Are You!

The storyline follows a quintet of (allegedly) British teens on an unexplained outing from “S. Peter School,” huddled aboard a perfectly restored 1970s-era, fire-engine red Italian school bus driven by Black character actor Anderson. Where they’re from and more importantly where they're headed is never mentioned, much less explained, but when a mysterious deadfall in the middle of the one-lane country road blocks their path, Anderson blithely takes the titular shortcut through some deep, dark forest only to be hijacked by an escaped serial killer dubbed “The Tongue Eater” (an over-amped Keyes). That turns out to be the least of these kids' problems when a generic, black-taloned and frothily toothy creature-of-the-night hijacks the hijacker and forces the gang to seek safety inside a labyrinthine, subterranean military installation.

Much is made of the fact that there’s a once-in-a-lifetime lunar eclipse going on, but youthful hero-type Chris (Kane, valiantly crushing on Oliver’s artist-babe), mouthy git-punk bad boy Reg (Sutcliffe), class brainiac Queen (Dew), and chunky class clown Karl (Emlano), spend 90% of their travails evading the creature(s) while wielding conveniently located torches and wandering around in spectacularly dull fashion, despite a hastily tacked-on post-credits gotcha.

The kindest thing I can say for Shortcut is that the briefly-glimpsed practical monster effects by Rome-based EFX outfit Makinarium (Zoolander 2) are nicely done (that is, if you’re able to pause the film and actually discern their handiwork) and cinematographer Luca Santagostino’s camerawork – when not confined to all those damned underground tunnels – makes top work of the clashing palette between the portentously crimson bus and the gaping green maw of the surrounding countryside. When all’s said and done, or devoured, at least this excursion into mediocrity is relatively brief, although, as mentioned, a vastly shorter cut would be much preferred.