If you’ve yet to reach your threshold of Eighties nostalgia, and also happen to find an empty hole in your soul where the lack of BMX stunt work once resided, sate your inner prepubescent child with Vinegar Syndrome’s reissue of 1986’s Rad. A questionable decision in and of itself, but this film has now been restored in 4K, making it just another blip on the “WTF 2020?” radar. If you have fond memories of this film, best to keep them that way, because even seen through a halcyon haze, Rad is a tedious exercise of endurance that has nothing to do the number of bunny hops achieved.

What passes for the barest thread of a plot essentially asks the question: “Can a small-town teen with exceptional bicycling skill outwit corporate greed while dazzling the girl and avoiding taking the SATs?” There are out-of-town bullies, a wise-cracking little sister, shady old white men, and of course, BMX shenanigans, I mean a lot of BMX shenanigans. Which, of course, is the film’s raison d'être. And if the actors or the writing or literally any other aspect of the film were even remotely fun or appealing, then this might get a pass. But this is a humorless affair, directed with workmanlike diffidence by Hal Needham in the nadir of his storied career (an interview with the film’s co-writer Sam Bernard noted that Needham would average 40 camera set-ups a day).

Far better would be to revisit the far superior 1983 classic BMX Bandits, directed by “anything goes” filmmaker Brian Trenchard-Smith, and starring a young Nicole Kidman. That film has more joy in its opening credits than Rad has in its entire runtime. 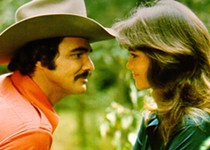 Smokey and the Bandit
Stuntman Hal Needham makes his debut as a director in this king of the "good ol' boy" movies.