Class is not just about income or aspirations, especially in Britain. It's a myriad of subtleties and tells, of little habits you can never get past. British linguist Alan S. C. Ross summed it up as "U" and "non-U" (the U standing for upper class), with the argument that it never matters how much money you have, if you use the wrong word, drop the wrong vowel, you'll never really truly be accepted.

That's Rory (Law), a wheeler-dealer businessman in 1980s London who has all the trappings: A beautiful American wife, Allison (Coon), two kids who love him, a great new investment job, and he's just returned from the States to live in a mansion in the countryside. He's got it all, but the perfection is superficial. Rory will never be U, and in the States, where Allison could never see who her husband really is in his native context, that never quite mattered. But now her dreams of rearing horses in the bucolic British countryside, being the lady of the manor, and to the manner born, collapse.

Durkin, who made his reputation with his scalding debut Martha Marcy May Marlene, hasn't been behind the camera since 2013 British shooting drama Southcliffe, but hasn't missed a beat as a filmmaker when it comes to building a sense of dread and implication. The Nest pushes up against the edges of the supernatural, of the way that shadows in big, empty houses play tricks on you, but it's all in service of a simple drama of a couple falling apart as the rocky foundations of their world are exposed.

This feels like the role that Jude Law was always meant to play. Durkin's script is roiling with a very particular kind of class sensibility, with Rory as the Saaarf Lahndahn wideboy made good, and Law catches every drop of his sense of alienation, his pretense and pretension, his dedication to the idea that one more big deal will be all that it takes. In this, Coon is the perfect foil, as Allison realizes that she doesn't, and maybe cannot, understand him at all (Durkin doesn't let America off the hook, with an underlying suggestion that Rory's biggest memento from the States is a dedication to the Reaganite economics of more, more, more). Allison's never simply the betrayed woman, either. Rory fails her through misguided good intentions, and she often responds with more deliberate cruelty. There's no winning here, suggests Durkin, merely a ragged stalemate. 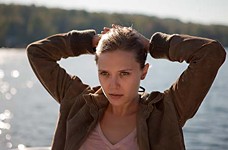 Martha Marcy May Marlene
A psychological thriller that's stripped of the usual Hollywood trappings, this film maintains a sense of oppressive threat throughout.