It seems that, every so often, there’s a horror title that is anointed as the next big thing well before release. It happened with The Witch and Hereditary, and this year that honor was bestowed on mysterious slavery drama Antebellum. The pitch – Janelle Monáe seemingly traveling through time to overthrow the Confederacy – was all too alluring.

Unfortunately, the actual movie is a jaw-dropping mix of wildly uneven performances, ill-considered cruelty, and a borderline incoherent plot so ineptly told that the trailer actually does a better job than the full film.

It’s hard to fault the intentions of writer/directors Bush and Renz, who so clearly wanted to pull the visceral truth-telling of 12 Years a Slave, The Painted Bird, and Come and See into the genre space (like that’s never been done before). But good intentions will always be the tarmac on the road to hell, and Antebellum – even with all its clumsy and earnest aims – is a rocky path indeed.

Monáe makes her headlining debut as Eden, enslaved in the Civil War South and subjugated to endless torments and tortures. After 40 minutes of grueling and sporadically artistically captured moments of misery, she awakens as Veronica Henley, an academic and author in contemporary America. The modern woman’s indignities are subtler than those inflicted on the victim of servitude, but no less an indicator of the nation’s inherent racism. How are they connected, asks Antebellum, and the answer is supposed to be a long, hard stare into the soul of a nation. Instead, it’s a clumsy, clunky statement of the blindly obvious, with an added edge of cruelty to which the filmmakers seem oblivious. The long-running narrative of American violence against Black bodies deserves to be handled with more insight and humanity than this.

On the performance side, it’s hard to say who is hung out to dry more or does less with the little they are given: Sidibe, as Valerie’s old friend and dating expert Dawn, delivering a sanctimonious monologue that reeks of wannabe mid-era Tarantino; or Monáe, who switchbacks between bland smugness as Veronica and immobile panic in her Eve incarnation. The third act, which shows exactly how this bifurcated woman is joined back together, should be a time for her to bridge the divide. Instead, she finds no continuity, then gets run over by the shockingly uninspiring cinematography of Don’t Breathe director Fede Álvarez’s usually fascinating go-to DP, Pedro Luque. There’s no verve or depth, a fact exacerbated by a lumpen edit that is designed to seemingly leave every line to die in the air. The only flashes of style come when Luque breaks out the high-speed camera for some slo-mo tableaux, usually of some Old South atrocity being committed by a stereotypical son of Johnny Reb.

Worst of all, that final reveal simply doesn’t work. It’s a grand, if blindingly obvious, political statement that screams, “We care!” without any weight. (At least Jena Malone, as a haughty daughter of the very-white-South, seems to grasp the absurdity of the situation, mangling her line with an overblown spoof of white privilege.) Neither inspired enough to work as a fable nor sufficiently grounded to bear up to even an instant of examination, Antebellum is a woeful misfire. 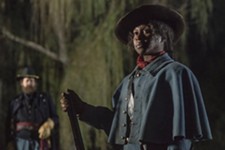