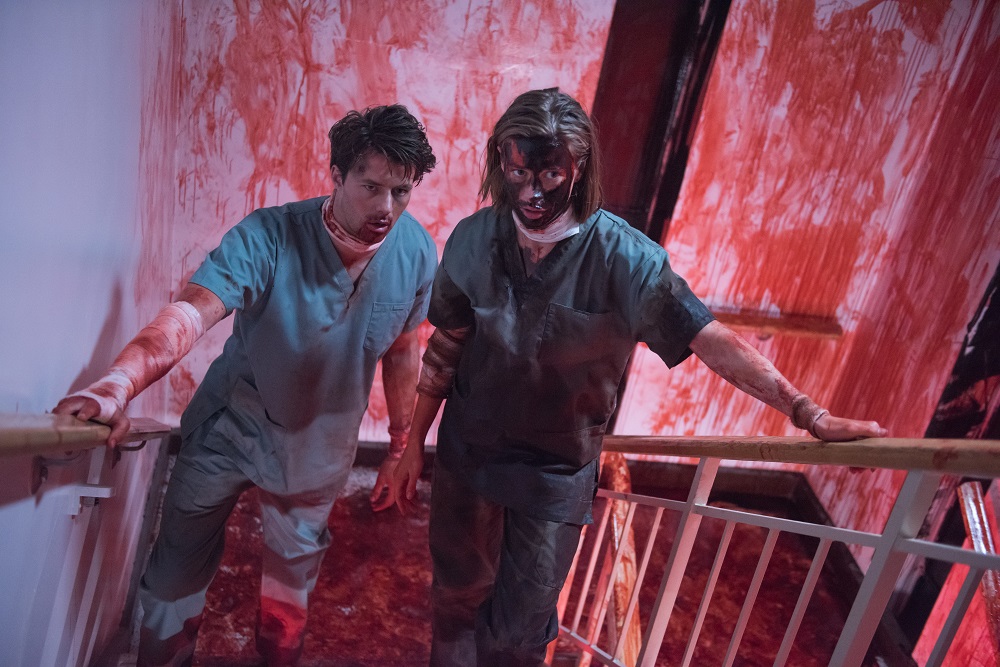 The first question that might strike you while watching bloody body horror Alive is, what exactly is Angus MacFadyen trying to do with his ridiculous accent? The Scottish actor mangles vowels as readily as his character – the unnamed Man – mutilates and rearranges the bodies of his two captives. He claims that he's their doctor, charged with bringing them back to health, but neither the anonymous man (Cocquerel) or the woman who is his ward mate (Stopps) believe him. Not that they're quite sure what to believe. Both wake up in what seems to be an abandoned sanitarium, covered in scars, wounds, and blood-soaked bandages. Even worse, both have complete amnesia, with only flashes of memories that don't line up, or make a whole heap of sense.

Director Rob Grant made waves on the festival circuit last year with his nasty-smart oceanbound black comedy Harpoon, and actually completed Alive a year earlier. They're both sealed bottle three-handers, but Alive is much darker, meander, and weirder. There's more of Kōji Shiraishi's infamous 2009 visceral J-Horror Grotesque than a Tale of the Unexpected-style intellectual frisson here. Honestly, you hate to use the overblown torture porn (toe)tag, especially since there's nothing there hat would put this in the realm of gross-out horror that you'd find on a truly underground imprint. However, Alive doesn't flinch from making the audience cringe, with ripping wounds, impaled eyeballs, and not-quite-surgical use of garden shears, as the doctor uses increasingly ghoulish techniques to keep his patients on whatever strict regimen it is that he has concocted.

But this isn't just an FX reel. Cocquerel and Stopps are engaging and sympathetic as they stagger through this nightmare, and Macfadyen hurls himself at the absurdity of his part. For much of the film he doesn't simply blur the lines between deranged medic, mad scientist, unhinged angel of mercy, and flat-out crazy mutilator. He stomps on them, mixes it all up, and delivers one of this year's most entertainingly over-the-top performances. Amazingly, it works, because his patients/victims are supposed to be completely incapable of working out exactly what he's up to – setting the scene for one of this year's most barking mad resolutions. In a less manic movie, it would seem ridiculous, but if Grant had settled on something less ludicrous, it would have been boring – and that's definitely a sin that Alive never commits.

If you like a side of cheese with your gristle, then Alive may well satiate your desire for a little gore with more.

Alive is on VOD now.