The Secrets We Keep

With decades of films about World War II under our belt, one might assume there are no new stories to tell. Then again, America has never been particularly good about writing its history. The Secrets We Keep, a new thriller from director Yuval Adler, explores what happens when we open our eyes.

After meeting in postwar Europe, Maja (Rapace) and Lewis (Messina) move back to the United States and settle into domestic bliss. Lewis parlays his medical career into a job as a local physician; meanwhile, Maja quickly becomes a well-liked member of the community. But Maja’s quiet life is ripped apart when she spies Thomas (Kinnaman), a Swedish factory worker who Maja believes might be the German officer who killed her sister. In a cold rage, Maya kidnaps Thomas and brings him home, desperate to hear him confirm the abuse she suffered at his hands.

Set aside the midcentury setting and The Secrets We Keep bears a striking resemblance to Big Bad Wolves, a 2013 thriller from Israeli filmmakers Aharon Keshales and Navot Papushado. In both films, the survivors of a heinous crime take justice into their own hands, questioning and torturing a man who may not be who he seems. Adler, also an Israeli filmmaker, makes excellent use of 1950s America in his film, building suspense through a community that desperately wants to put the past behind them (and would rather look the other way than deal with instances of wartime trauma).

With a small cast and a handful of locations – the only other character of note is Rachel (Seimetz), Thomas’ unsuspecting wife – The Secrets We Keep blends the best of B-movie thrillers and black box theatre. Maja is unrepentant in her pursuit of justice. Lewis, a faithful husband who served far away from the war’s violence, is smart enough to know when to step back. In its quieter moments, The Secrets We Keep is a thoughtful exploration of the things we choose to tell our loved ones, and Rapace and Messina ground the escalating violence in a relationship built on trust.

And while the film’s outcome is rarely in question – the more torture Thomas endures, the more the narrative path narrows – the ending offers a satisfying reset of each pair of relationships. Like their community, Maja, Lewis, Thomas, and Rachel have each wallpapered over the worst of the war. No matter who walks out of Maja’s basement alive, the trauma that surfaced will take years to unpack. 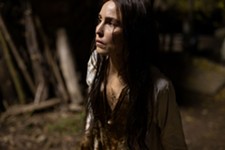