Lucy Gulliver belongs in the same conversation as other polarizing, force-of-personality characters like Juno and Hannah Horvath – but as a contrasting example of what happens when something in that characterization goes wrong, on the page and in the performance. Playing Lucy, Geraldine Viswanathan – who pulled focus from major stars in her film breakthrough, 2018’s Blockers – brings big, sloppy energy but little subtlety to The Broken Hearts Gallery, an overworked romantic comedy from first-time feature film writer-director Natalie Krinsky.

A gallery assistant in New York, Lucy has curated her own informal museum of heartache by holding onto ephemera from her failed relationships, the many knick-knacks now cluttering her room. (Her no-nonsense roommate nails it: “This is active trash.”) It doesn’t take a genius to see where this is going, and from what psychic burdens Lucy must unshackle herself, but it takes – consults Syd Field – fully 30 minutes to arrive at the titular gallery. Let’s do it in one sentence: After a couple meet-cutes with a would-be hotelier named Nick (Stranger Things’ Montgomery, wan), Lucy convinces him to let her take over space in his under-construction Brooklyn boutique hotel and create an art gallery displaying the vestiges of other people’s doomed romances. The film’s remaining 78 minutes are about convincing us these two opposites – boisterous, bull-in-a-china-shop Lucy and Nick, whose heart rate never seems to rise above mild bemusement – are made for each other.

Alas, the love match is cringing; as a rom-com’s raison d’etre, their limp connection pretty much sinks the thing. But when the script settles down and stops feeling quite so much like an everything-but-the-kitchen-sink thesis project, it has its bouncy moments – Krinksy’s good with a quip. And as a director, she’s far more successful harnessing the charisma of two pairs of supporting players: Molly Gordon and Phillipa Soo as Lucy’s roommates; and Arturo Castro and Megan Ferguson as Nick’s married-couple besties. They’re all outstanding in small but sit-up-and-notice turns, and one suspects literally any mix-and-match of them in the lead roles would have produced a more rousing romance. 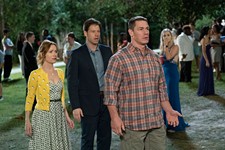