This newly-restored curiosity, originally released in 1999, gives Italian neorealism a post-modern nudge: Roberto Rossellini as metatheatre. Based on Elio Vittorini’s allegorical novel first published in Italy in 1941 under the title Conversations in Sicily, Sicilia! is principally an anti-narrative of stylized exchanges between the Sicilian-born Silvestro (Buscarino) and various other Italians he encounters during his first homecoming visit, having immigrated to the United States 15 years earlier.

In the course of his episodic sentimental journey, Silvestro meets (among others) a disgruntled orange vendor decrying the island’s high level of unemployment and impoverished economy; overhears two fascistic policemen discussing law and order; and chats up both a gloomy landowner and a comically wide-eyed government bureaucrat in the passenger compartment of the train he’s boarded for the province of Syracuse, his birthplace and — as it turns out, despite protestations to the contrary — where his estranged mother still lives. The centerpiece conversation between parent and son that follows resembles a therapy session in which each attempts to sort out family history, broaching everything from happy memories of bypast meals (snails and wild chicory!) to bitter recriminations about a philandering husband whose adulterous behavior led to the wife’s decision to dissolve the marriage, much to their offspring Silvestro’s macho chagrin.

Unlike the film’s other politically and socially tinged conversational interactions — Sicily’s status as the dirt beneath Italy’s boot permeates the movie, and the milieu is decidedly pre-war Mussolini — this pivotal tète à tête is wrought with the promise of the emotion Eugene O’Neill orchestrated in his more enduring plays. But directors Huillet and Straub purposely keep you at an odd distance, rendering Sicilia! a head-scratching exercise in formalist cinema. The experimentalism (if that’s what you call it) is a distraction, ultimately. The largely nonprofessional cast, reportedly recruited from the Italian stage adaptation of Vittorini’s novel, appears to be instructed rather than directed. Many modulate the delivery of dialogue by sing-songing the words (then again—what better language to do so than melodic Italian?), and certain gestures are awkwardly mechanized.

While William Lubtchansky’s black-and-white cinematography is frequently sumptuous (the exception being the movie’s washed-out travelogue footage), the mostly static camerawork only underscores the film’s artificiality, particularly when an actor stops speaking and remains eerily still for a Pinteresque minute, as if the film projector malfunctioned and the celluloid frame froze in time. Whenever this theatrical pause occurs, you ask: To what end? Perhaps a question mark in the geographically inspired title, rather than an exclamation point, is in order.

Sicilia! is available now as a virtual cinema release. 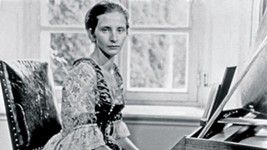