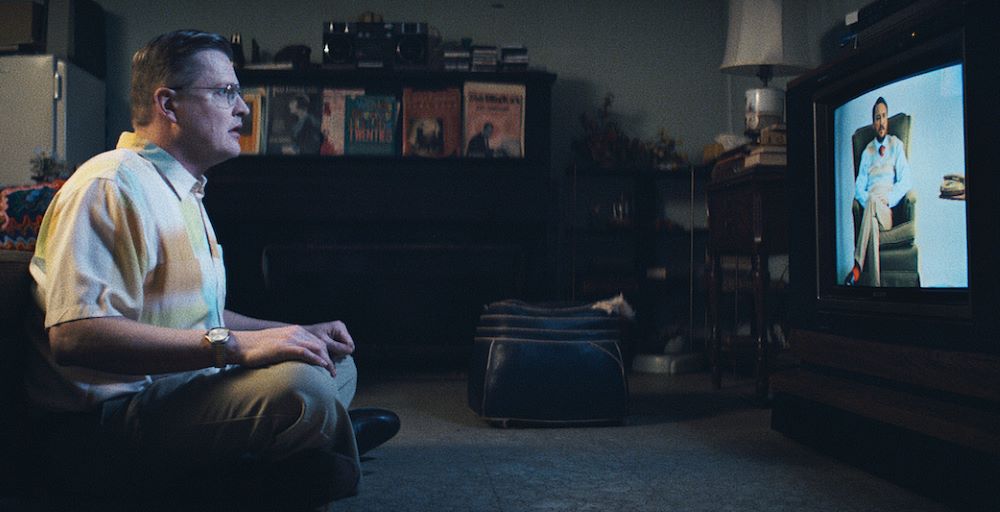 David is trying to be good. He's desperately lonely, and just looking for the right woman. Unfortunately, when you live with your mom, who is disappearing into dementia, and all you've got is your VHS machine and some video dating tapes, it's tough to make that real emotional connection. But then that's when Andy walks into his life. Or rather, unspools, because Andy is a guy on a videotape called Rent-A-Pal. Hey, friendship is difficult, but Andy - a sort of choose-your-own-adventure video character, but where the digital player is your unquestioning buddy - will always be there for him. Always.

Rent-a-Pal, the debut feature from writer-director Jon Stevenson, is an oddball two-hander in that David (Folkins, a pile of neuroses and frustrated ambitions made flesh) and Andy (king of the geeks Wheaton) are never in a real shared space. David just winds the tape back and forth to the right moments, just so he can emulate having a real friendship. As time goes on, the responses become a little too spot-on. Is Andy really talking to him, or is David just so incredibly predictable - just another bitter shlub with mommy issues, for whom any canny manipulator could write the other half of a conversation for without even being in the room.

It's ultimately David's real-world tragedy that has the most impact. His mother's declining mental state (distressingly captured by veteran stage actress Brady), and the sudden arrival of the equally awkward Lisa (Rutledge), a women perfect for him if he can only get past his own self-destructive habits. It often overshadows the superficial support mechanism of his relationship with one-inch buddy, and it's only in the final act, when David finally and inevitably collapses, that the strands finally come together.

When that coalescence finally happens, to quote Andy, it feels like you'll have been waiting for this moment forever. Stevenson's script, which uses Andy's prerecorded lines in significantly different contexts at different stages, is smart in the dialog but wavers in its structure, and could have benefited from a leaner edit before shooting. When the grisly final act arrives, he leans heavily into the implicit darkness, never shying away from painting out the perils of artificial relationships. Yes, the story may be set in the early 1990s, but by stripping away all contemporary trappings he has something subtle and smart to say about online culture, with David as an incel before the term even existed. Plus, it was about time someone realized that Wheaton - an actor who immersed himself in and educated himself about the pitfalls of internet life in his long-held position as geek-in-chief - makes a great manipulative creep. It's just a shame that Rent-a-Pal spends so much time finding a degree of sympathy in David's plight, only to drop Folkins' great work and push the damaged protagonist into predictable delusional villainy when the tape finally stops rolling.