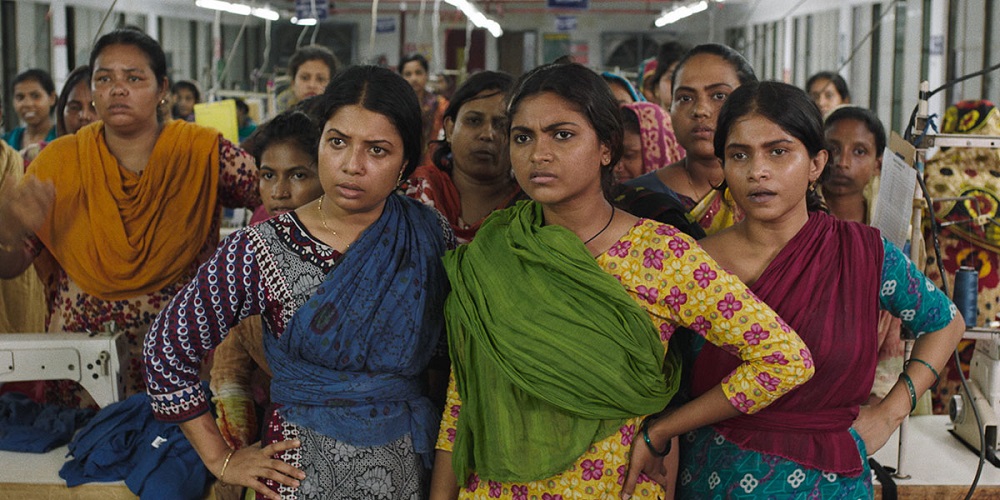 Norma Rae got off easy, considering all that’s transpired in the decades since director Martin Ritt had Sally Field hold up that sign with the dreaded word “Strike” on it. Four decades later, female workers at the bottom of the global textiles food chain don’t even have a hard-hearted but ultimately all-American heartland stubbornness to which to cling. These days most if not all of those low- to occasionally no-paying jobs have been shipped overseas where everything, including the safety and dignity of the garment workers currently sewing that generic Astros jersey hanging forlornly in your closet, is cheap, cheaper, cheapest. Consumer culture run amok, coupled with a rigid patriarchy and the grim rigors of sweatshop capitalism facing the women workers of an unnamed garment factory in Dhaka, Bangladesh is the subject of Hossain’s film. The portrait he paints, while visually arresting thanks to cinematographer Sabine Lancelin’s eye for Dhaka’s colorfully saturated and gritty milieu, is a grim one.

Following a fire in her overcrowded factory (echoes of New York's 1911 Triangle Shirtwaist conflagration), 23-year-old protagonist Shimu (the excellent, fiery Nandini) and a small group of friends seek out their company’s bullish boss (Bari) for compensation, only to run up against the brick wall of impossible bureaucracy that favors the owners over the workers at every turn. Shimu’s unemployed husband Sohel (Monwar) is no help but a sympathetic labor organizer, Nasima Apa (Noswami) urges Shimu to organize her downtrodden coworkers — many of whom cannot even read the educational brochures Apa hands out — explaining that she only needs 30% of her compatriots to sign in order to unionize.

This sets in motion a war of wills between Shimu and The Powers That Be while also offering an illuminating lesson on strategically clever and borderline guerrilla fighting for one’s basic human rights in the Indian subcontinent. Take heart, though; Hossain’s film isn’t as inexorably heartrending as it sounds. There’s more than one fire raging at the core of this gripping, neo-realist tale: Once educated, Shimu blazes her own path towards justice, proving that maybe, just maybe, a little bit of guile and precious knowledge can go a long way in the fight for simple human decency.