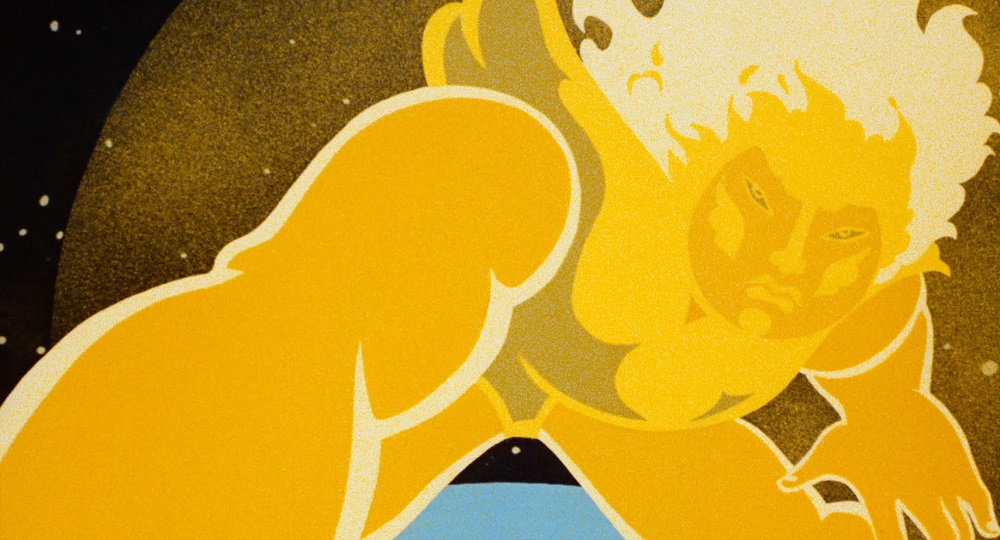 Son of the White Mare

Myths, even those of cultures alien to our own, work on instinctual levels. That's true for Son of the White Mare, Hungarian animation master Marcell Jankovics' restored obtuse masterpiece. Within its vibrant, earth-tones frames he free adapts the legend of Fehérlófia, a common story among the peoples and tirbes of the Pannonian Steppe most famously recounted by Hungarian folkloris and poet László Arany. Fehérlófia, also known as Treeshaker, is the strongest man alive, due to being nursed on the milk of his horse mother for seven and seven years. After her death (her child literally suckles her to death), he is reunited with his two brothers, Irontemperer and Stonecrusher. They launch on a quest to kill the gnomes and dragons of the Underworld, to claim their castles and the kidnapped princess they have forced into marriage.

Mostly ignored in its native Hungary, and seemingly rediscovered every decade or so in the West, the latest restoration is immersive and enthralling, an experimental feast for the eyes even if the story itself is more to be felt than truly understood (Jankovics himself reputedly admitted to forgetting parts of his narrative intent). It is undeniably stylistically unique: A mix of expressionism, art deco, and traditional folk and tribal arts, it has points of similarity with the psychedelic cinema of the 1970s - even if Jankovics would likely have recoiled at such a simplification. This is mythology, not third eye visions, and works on iconic levels. The effect is shamanic, like when Diego Rivera fused Mayan and Aztec symbolism into his epic Modernism, but Jankovics was absorbing the less-familar (to American eyes) visions of Scythia and the Pannonian Avars.

When audiences are used to seeing mythological characters rewritten for modern sensibilities (like a certain kinder, gentler God of Thunder), Fehérlófia is an undoubted throwback to a more primal and primordial view of masculinity. A braggadocious bore, he spends much of his time engaged in quite literally Herculean feats of strength, leading his brothers on a series of adventures in which brute force is more important than intellect, and the trio are most successful when unified - usually under the command of their sun god sibling. They're all portrayed in bold colors (also, distinctively for Jankovics, lacking the typical black outlines of most animation, further emphasizing the fluidity of motion, and allowing for constant flow and transformation), indicative of their metaphorical nature. This is myth, not drama, and intended to be absorbed as such. At that level - as an avant garde interpretation of a folk tale - it's a work of engrossing weight, loaded with arcane symbolism around sets of three, fertility, and astrological symbols, and archetypes that would have given Joseph Campbell material for a dozen theses. As a narrative work, it undeniably drags: but then, that's not really its intent. This is a spectacle to be absorbed and analyzed. Find the biggest screen you can, and make your own footnotes.