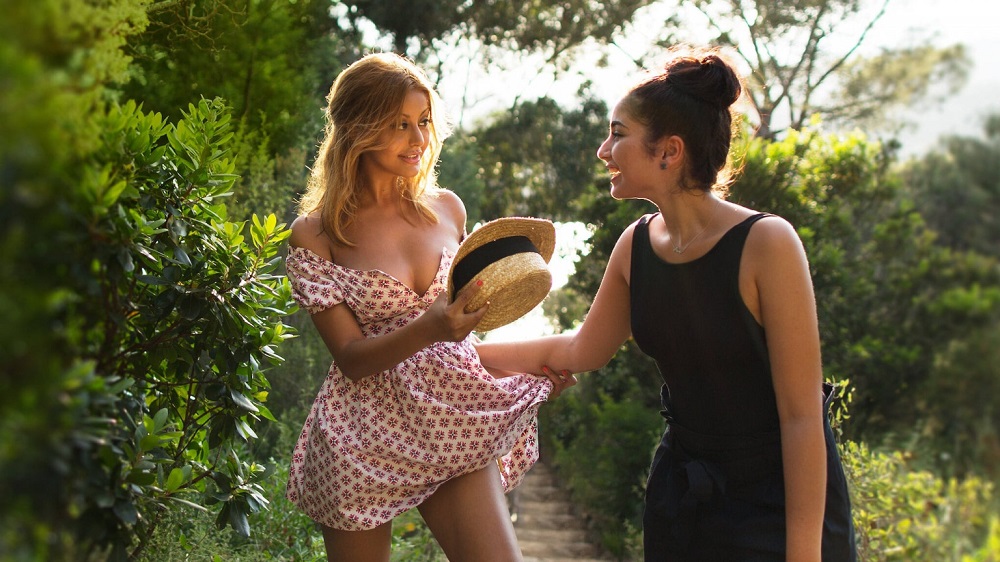 In 1957, French Caribbean singer Henri Salvador wrote “Dans Mon Île” as an ode to the easy things in life: lying in the sun, watching trees sway, doing nothing with someone you love. Translating to “On My Island,” it’s sung by a guitar-playing bachelor in Rebecca Zlotowski’s An Easy Girl (Une Fille Facile in French), which won the Director’s Fortnight prize for Best French-language Film at the Cannes Film Festival in 2019. Salvador’s dreamland ditty is syrupy sweet and ends too soon, special without much effort. But the film, on the other hand, mishandles the simple and becomes simplistic.

An Easy Girl follows 16-year-old Naïma (Farid), born and raised in Cannes, who halfheartedly wishes she was someone more exciting. As in many coming-of-agers, the protagonist’s naiveté necessitates a role model that’s older, cooler, more ready for the world. This is Sofia (Dehar), Naïma’s spontaneous older cousin who, at 22, has grown into her adulthood and sexuality. Love disinterests her, she tells Naïma, but sex is more exciting, and she rattles off her tastes as plainly as one might write a grocery list. Naïma, too young for anything that Sofia’s lifestyle entails, is overwhelmed by the challenge of respecting both her cousin and herself, different as they are.

Sofia is the film’s strongest invention. Unlike many “easy” women on screens before her who have (valiantly) spent their runtime outspoken in their resistance of slutshaming, Sofia seems simply uninspired by that fight. It’s not that she’s too strong or too cynical to let her critics get to her, and it’s more than just “I don’t care what you think.” Instead, Sofia seems to be the only person listening when our therapists say that guilt and shame don’t serve us — those emotions aren’t helpful, so she chooses not to engage, proving her depth in other ways. Through Sofia, Zlotowski suggests that casual sex is not just hedonism, or perhaps that hedonism is deeper than pleasure-seeking alone.

But An Easy Girl doesn’t give Sofia the impact that she could have; or rather, it doesn’t allow Naïma to be impacted. Where Sofia’s care could guide Naïma into a similar rejection of shame and stronger sense of self even outside of a sexual context, Naïma leaves the film still craving the validation of people she barely knows. The two are thrown off of a yacht by Sofia’s wealthy summer lover, the older Andrès (Lopes), who has deceitfully accused them of stealing as a way to get rid of them when he’s tired of their company. Seeing that her affair is over, and again unprovoked by shame, Sofia gathers her things and leaves without a word. Naïma chases her in tears, begging to go back and prove their innocence to a man who already knows the truth. It’s painful to watch, because Sofia has already proven it doesn’t have to be that way.

On the whole, An Easy Girl is a light and pleasing enough watch. Gorgeous shots of the French coast, clichéd but endearing “Carpe Diem” tattoos, sea urchin sexual innuendos, and convincing performances of adolescence give it moments of depth and humor. But one of the film’s final moments sees Naïma returning to the yacht alone to find Andres’ friend Phillipe (Magimel), and she’s only satisfied once he promises he knows she’s not a thief. It’s understandable, but in a film titled for a girl who proves that being “easy” is also about making life itself easier to handle, that ending leaves one question unanswered. What if, instead of just respecting easy girls, we bothered to learn something from them?

An Easy Girl is available now on Netflix.