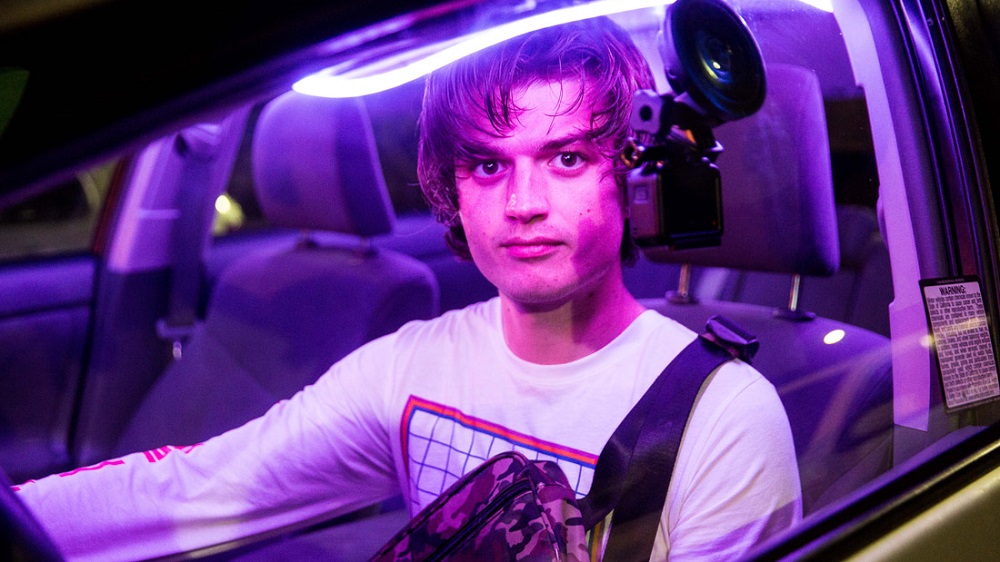 Desperation is not appealing, and it drips from every pore of wannabe celebrity streamer Kurt Kunkle, aka @Kurtsworld96. He sends out his daily tedium to single-digit followers, beneath notice or contempt (he's not even the first Kurtsworld, and check out the name on his takeout drink). He's been depending on internet approval that he doesn't get from his junkie DJ dad (Arquette), and makes enough of a living driving for a rideshare app called Spree that his mom hasn't kicked him out yet. His solution to his non-entity status is to go on a literal spree, picking up passengers, sedating them with drugged water, then murdering them on his stream. You know, for clout.

As played by Keery, Kurt is directionless and amoral - not evil, but so incapable of both human interaction and self-realization that he has no idea what to do when he meets a real online celebrity. Well, celebrity-ish: comedian Jessie Adams (Zamata) has a big online following, but that just means getting stiffed at when she headlines low-rent comedy clubs, rather than getting stiffed as an opener.

Told via electronic interactions, Spree plays fast and loose with the stricter versions of screenlife storytelling, dropping in security camera footage, and moments from other streamers' feeds. However, writer/director Eugene Kotlyarenko arguably pioneered the whole genre in 2011 with his techno-relationship comedy 0s and 1s, then came back to the form with 2018 SXSW selection Wobble Palace, so he's fiddled with it before. He also tells the story as a true digital native: too many tech-based films smash into a brick wall by fundamental errors about what is now so familiar to all of us (it only took a bad Candy Crush knock-off in Tara Subkoff’s otherwise fascinating #Horror to make it feel unrealistic). Kotlyarenko doesn't make those fundamental mistakes, and instead builds in a second narrative through the Greek Chorus of the comments on the various feeds that Kurt takes over in his search for clout.

Subtlety is in short supply in Spree, with even the title being a heavy-handed double entendre. It may be on the nose, but in a media satire that's a plus because they're always about honesty in a disingenuous environment. Kotlyarenko and cowriter Gene McHugh don't quite let anyone off the hook, populating the back seat of Kurt's car with a succession of bigots, douchebags, influencers, and social media pariahs that you vaguely wish would all get offed. That's always the balancing act with dark comedies, that you can't sympathize too much with the victims or it just becomes a slasher from the killer's point of view. Even Jessie is far from perfect on this point, and her complexity as someone who loathes but depends upon clout for her career. Much like the upcoming Random Acts of Violence, Spree isn't interested in easy answers or simplistic moralizing. Kurt may have his excuses and justifications for being the way he is, the script argues, but with an audience of zero, to whom is he making those excuses?

If there's a fundamental issue, it's that Spree is too broad, too scattershot for what is basically a bizarre character piece. It's an inherent dilemma for the script, because it depends on the combination of streaming and rideshare apps, of the ubiquity of people who live every moment of their lives online, of nobodies who we are told to accept as somebodies. Kotlyarenko and McHugh need to cram everything in for their bloody parable to have any sense of truth to it, but then it feels episodic, disjointed: and that's also where its debts to the granddaddy of killers-on-film commentaries Man Bites Dog, become clearest, and it feels weakest.

On top of that, the victims are played as one-note, with only Jessie having any depth or character arc. Then again, in an age in which influencers have reduced their online personalities down to what they can squeeze into a character-restricted profile, then act out that profile constantly, what's too broad? It does, however, allow Keery a little more breathing room for Kurt, who spouts vagueries about his home-spun philosophy which he calls "The Lesson." Its nothingness defines it, and invokes the resonance between pseudo-mythological babble like The Secret and incel subreddits.

So while there's nothing incredibly new here in the narrative, it's also a reminder that Keery has natural charisma, and is turning that to increasingly interesting ends. There's a touch of Kurt Russell about him, who has always been at his most fascinating when he rejects the standard leading man tack and instead leans into the venal, the self-obsessed, the shallow. Keery a knack for adding depth to unlikable, callow, shallow characters, like how he redeemed Steve in Stranger Things from the low-grade bully of season 1 to the affable dolt of later episodes. Kurt isn't some sneering Joe Rogan acolyte who spreads Q propaganda for giggles: He's what you get when you leave your kids in front of Logan Paul streams. Much like the Hollywood-obsessed Eric Binford in 1980 cinema satire Fade to Black, he's pathetic and dangerous, the deadly symptom rather than the problem.