Jazz on a Summer's Day

Who invented the multi-day destination music festival? If you say Woodstock, please leave, put down the patchouli and watch Jazz on a Summer's Day, the remarkable record of a long weekend spent at the 1958 Newport Jazz Festival. Oh, yes, and it's arguably the first ever real concert movie as well. That's why the Library of Congress inducted it into the National Film Registry in 1999, and why it's undergone a gorgeous and lustrous 4K restoration, having already been freshened up in 2009.

Six decades after the original release, what editor/director Aram Avakian and fashion photographer-turned-filmmaker Bert Stern captured remains a crystalizing moment in pop culture. The festival was in to its fourth and by far biggest year, and they filmed highlights of the four day event, restructuring and heavily reordering the footage to feel like a single day.

The rhythm of the selections may seem a little off to modern jazzophiles, like including just a glimpse of Thelonius Monk (with a lengthy explanatory introduction by compere Willis Conover), and nothing by Dave Brubeck or Ray Charles. But that's looking at the day, and at jazz, through modern eyes, and with modern tastes. Avakian and Sterm catch the breadth of what the jazz scene was right then: It's Anita O'Day (only a few years out of jail on a cooked-up heroin beef) looking like she'd just come from the Kentucky Derby and skatting through "Tea for Two"; it's Louis Armstrong cracking Tommy Teagarden up as they riff through "Old Rockin' Chair"; It's the skintight rhythms of cool jazz innovator Chico Hamilton; and it's Mahalia Jackson, topping Saturday night with a version of "The Lord's Prayer" that shouldn't work but still soars (don't tell me Aretha Franklin didn't see that performance before she made "Amazing Grace" her own 14 years later).

What's a little lost over time is how nakedly political the whole affair was. It was one thing for socialite Elaine Lorillard (an inspiration behind Grace Kelly's music-loving socialite in High Society) to go to Boston to watch jazz, but to bring college kids and Black musicians to the plutocratic summer homes of Rhode Island's elites was a completely different matter. There were headlines and arrests, it was all quite the scandal. But Avakian and Stern throw that all out the window. This is a weekend of joy and music, where the shocking appearance of Chuck Berry (oh, the infamy!) is just another wonderful moment.

That's also why they concentrate so much on the crowd. They linger on audience members – not making them characters, but they're as essential to the story being quietly told as anyone on stage. Mid-afternoon, they turn up in polite picnic attire, taking the edge off the heat, but the audience changes across the days, a slice of Americana. Families rub shoulders with beatniks, trad jazz quartets in jalopies groove past pioneers of syncopation. This is jazz as the first great integrated American art form (yeah, go tell your La La Land-hating snob buddies I said so), and Jazz on a Summer's Day is as quietly vital a political document as it is a gloriously entertaining sprint through a long weekend that changed the music industry forever. Never more vivid or entrancing, the restored Jazz on a Summer's Day is a time capsule, yes, but it's also a vivid snapshot that makes you feel like you're there. 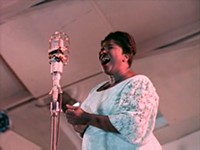