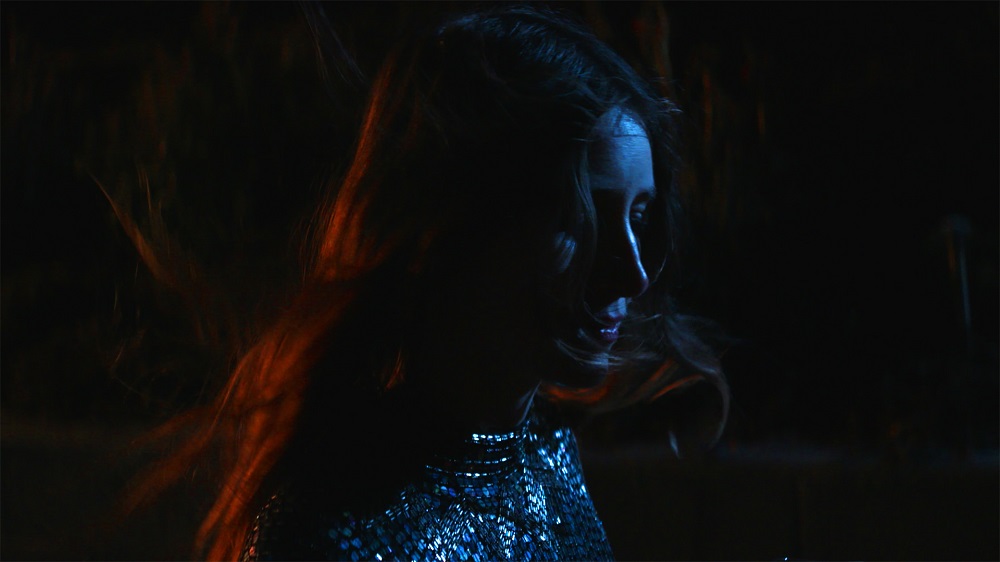 There's a zen koan about a monk being chased by a tiger who falls off a cliff, only to grab a root and escape plunging to his death. Then two mice start eating the root. He then sees a strawberry, and decides, in his last seconds of life, to eat it.

The point of the parable is enigmatic, but the edges of its fatalistic metaphor are at least discernible. Not so in Amy Seimetz's gloomy dramedy meditation on how we look at death, She Dies Tomorrow. Unlike the monk, there's no seemingly imminent threat to Amy (Shiel), beyond a mysterious and sudden belief that (as the title says) she will die tomorrow. How? Why? Irrelevant. She is convinced of it, and her conviction is transmissible. First to Jane (Adams), who initially believes that Amy is just back on her old chemical dependency problems, but then across her extended family, friends, random strangers she meets at a house. There are a few colored flashing lights, some splashes of blood, an inference of something uncanny, but it's mostly just seasoned indie character actors moodily staring off as they disinterestedly complete a modicum of unfinished business (ending a relationship, unplugging a parent's life support, driving dune buggies).

Is it an art house riff on The Color Out of Space? An absurdist version of Debbie Downer? Or does it take itself as seriously as it seems to imply, with a message about how solipsistic everyone becomes in self-piteous examination of their own mortality? Lacking a clear purpose or any sense of profundity, it definitely achieves a vague and ill-defined sense of metaphysical angst, like Rooney Mara's pie-eating sequence from Ghost Story stretched out over 84 somewhat directionless minutes. Yet that mood is not enough to overcome the lack of structure, or the fact that Shiel (who normally excels at this kind of innovation, as shown in the emotionally brutal yet fascinating Kate Plays Christine) is just left in front of the camera to perform – and that's not enough.

She Dies Tomorrow often feels more like an experiment than a film – which would be fine, but Siemetz doesn't do much to define her metrics for success or failure. Muddily shot, it's entry level nihilism of the flavor that most people get out of their system in their teens. Originally intended to premiere during SXSW, there's a strain of thought that suggests it's become more timely due to its release during the coronavirus pandemic: Instead, it feels even shallower. It's particularly pointed that it tackles similar themes to the enchanting and vivacious We Are Little Zombies with a fraction of the perspicacity – even the giddily glib Palm Springs had more insight into the meaninglessness of life.

She Dies Tomorrow is available on VOD now.