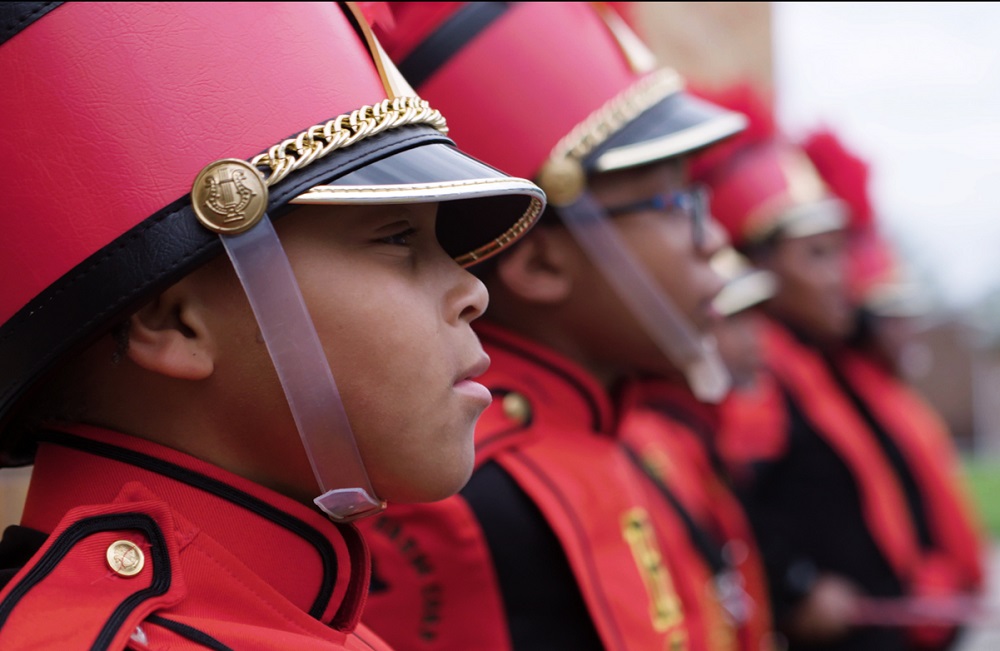 Upbeat stories are hard for news outlets to handle. One, they can feel disturbingly rare. Two, disaster always seems to lead. Three, they don't happen overnight. They're the decades that Edward "Nardie" White put into establishing the River City Drum Corp. Underpinning it all is the passing of the baton: White's decision to finally retire, and hand directorship of the corp to Albert Shumake, one of the first students he ever taught and the constant presence alongside the great man.

That's why documentaries like River City Drumbeat are so important, as it tracks - with empathy, insight, and respect - White's final year as conductor. White's life has been dedicated to building this community, and to connecting these kids to their inheritance and larger culture - as Black Americans, as the descendants of slaves, as kids in West Louisville. There's also something wonderful in the way he slides life skills lessons into the corp (kids have to make their own first drum, and that means learning to use a drill, and if you can use a drill, that means a little more control over your world). However, there's also an important lesson about the value of creativity, and how White was told as a teen that he should concentrate on sports, not music, and how radical it was for him to plant his feet and say, as he does at one point, that Black arts matter. That's a subject that has proven very dear to director Marlon Johnson, who has tackled the theme in a series of documentaries (Symphony in D, Deep City, and Theaster Gates). He's found particularly fertile ground in the cracked streets of West Louisville, and in the endless kindness of White. At the same time, there's a constant feeling that what makes White exceptional and vital is his commitment, and that there are plenty of people out there who can and do fulfill that same role (I, for one, would happily sit through a parallel documentary about White's friend and monumental sculptor Ed Hamilton, who briefly appears).

The larger message of River City Drumbeat isn't just about how important White has been to his community. It's about how important community is. That may sound trite, but having this focal point is everything. It's not about creating artists. It's how a kid like Jailen Leavell, who could well have got lost in a system that doesn't care about him, ends up college-bound and with the skills to live and thrive there. It's not even about White's pivotal role in the corp and in the lives of these students. It's in how the community can thrive both without and because of him, and because of people like Shumake who choose to care. It's not in the fact that these kids get to go to other cities for shows and competitions. It's the kid who, for the first time in his life, saw how many stars there are in the night sky because they were away from their neighborhood's streetlights. And it's definitely not about who wins or loses a drum battle. It's about how different communities can come together, compete, even mean mug, but then clap and shake hands. In brittle times like this, that's everything. As one proud parent puts it, that's what it's all about.