There's a particular flavor of British cinema that has found a home with American audiences. Somehow, the trope of the awkward Englishman has flourished beyond Hugh Grant's post-Noel Coward mumblings, and a generation or two of upper crust middling leading characters have bumbled amiably but unimpressively across the screen, undergoing some kind of mild emotional growth.

And so it is with Made in Italy, as failed gallery owner Jack (Richardson) sets off to the gorgeous rolling hills of Tuscany with his grumpy father (Neeson) in tow. He's convinced his surly artist dad to sell the inherited family home – inherited, that is, from Jack's late mother, who died in a car crash. Not that such an emotional connection is of any importance to Jack, who just wants to use the money to buy the gallery he runs for his ex-wife.

Father and son in real life, Neeson and Richardson have been very open that there's an emotional connection here to the tragic death in 2009 of Natasha Richardson (a respected actress in her own right, and wife and mother to the pair respectively). As cinematic therapy sessions go this is less grating than most, if only because it adds a little honesty to the rote nature of the script. If you think you can guess how this plays out, you're not wrong. Made in Italy is exactly what you think it is: Father and son clash, come to understand each other even though they are so different (what on Earth could the art dealer and the artist have in common?), old wounds are healed, and there are a couple of unexpected pratfalls (plus a perfectly over-the-top cameo by Walsh as a hippyish potential buyer whose bangs seem to be eating her face). Of course it leans into stereotypes, not least that all the Italian villagers are charming, gregarious, throw wild parties at the drop of a hat, and love art and the early films of Lina Wertmüller. And of course there's a love interest with a little tension of her own, in the form of local restaurateur Natalia (Bilello), who flirts harmlessly with Robert but flashes more meaningful smiles at Jack.

Predictable, affable, and completely guileless, the only part of Made in Italy that distinguishes it as having been made now, rather than any other random point in the last 30 years, is how grizzled Neeson's beard has become. The hapless English romantic lead bumbles on. 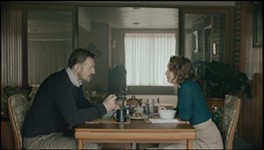