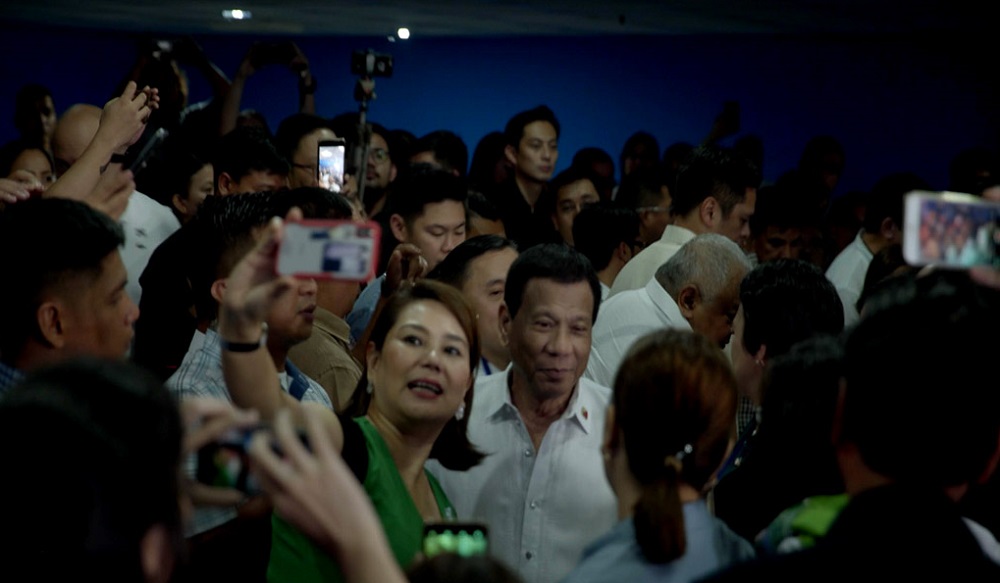 There's a playbook for populists. It's been deployed across the world and the only one who seemed to see it coming is Filipino reporter Maria Ressa. "Everything can be turned upside down," she warns in Ramona S. Diaz's rage-inducing documentary A Thousand Cuts, and the tools of this inversion have been test-driven in the Philippines before being imported to the Northern Hemisphere.

Alison Klayman flipped through the playbook with her 2019 portrait of Steve Bannon, The Brink: Here, Diaz shows the personalities that have defined the Philippines' radical shift to violent oppression. There's pop star Mocha Uson, who weaponized her blog to slander legitimate news agencies, and ended up as presidential assistant press secretary. National Police Chief Ronald dela Rosa, a posturing "hard man" who justified mass murder under the banner of "the war on drugs." And, of course, President Duterte, who portrayed himself as the underdog outsider who would shake up politics and clean up the streets, who didn't just spitball about shooting someone on Fifth Avenue - he went on TV and bragged about killing three people in the last few months. As Patricia Evangelista (an investigative reporter for Ressa's news site, Rappler), bluntly states, "He just offers not just change, he offers revenge."

These figures seem familiar because, as Ressa notes, American right-wing violent populism was foretold in June, 2016, when then-mayor Duertete swaggered and bragged and menaced his way into the presidential palace, and began a deliberate campaign of menacing the press, drug addicts, the poor - anyone who could be seen as a straw man enemy, and a tool to gain even more power. All the while Ressa and her team - outwardly calm, inwardly too smart to not know what the long-term plan is - stayed true to the cause of journalism, covering Duterte setting himself up as the savior of the disenfranchised in the 2019 elections, even as he and his allies increasingly targeted the free press.

"We stupidly believe that goodness wins over evil," Ressa tells her sister on the way to a press gala in New York - that scene one of many that shows how placing herself in peril at home was making her an international celebrity of the free press. It's clear she's risking her life every time she goes to the office, just as opposition party candidate Samira Gutoc (briefly featured in a series of slightly disconnected asides) is risking hers every time she stumps in the markets and streets - and, it is apparent, as did Diaz in the act of recording these dissidents in their fight against dictatorship.

Yet Diaz stays out of the way of her own lens, instead giving a portrait in context of Ressa's valiant struggle for truth, and her determination to simply do the job even as she becomes part of the story. That's inevitable, because her dissection of the network of trolls and bots used to discredit and target the free press at large has been designed to discredit and target her, and her staff, and her publication. Charming, hardworking, committed, compassionate, and earnest, she and this haunting, depressing, infuriating film are reminders that every time a politician slings mud at the "lamestream press" or talks about "fake news," what they're really doing is declaring war on facts - and on the people who still believe in the truth.

Imelda
Billed as a "behind the shoes" look at Imelda Marcos, this fascinating portrait provides unprecedented access to the former first lady of the Philippines. Although ...