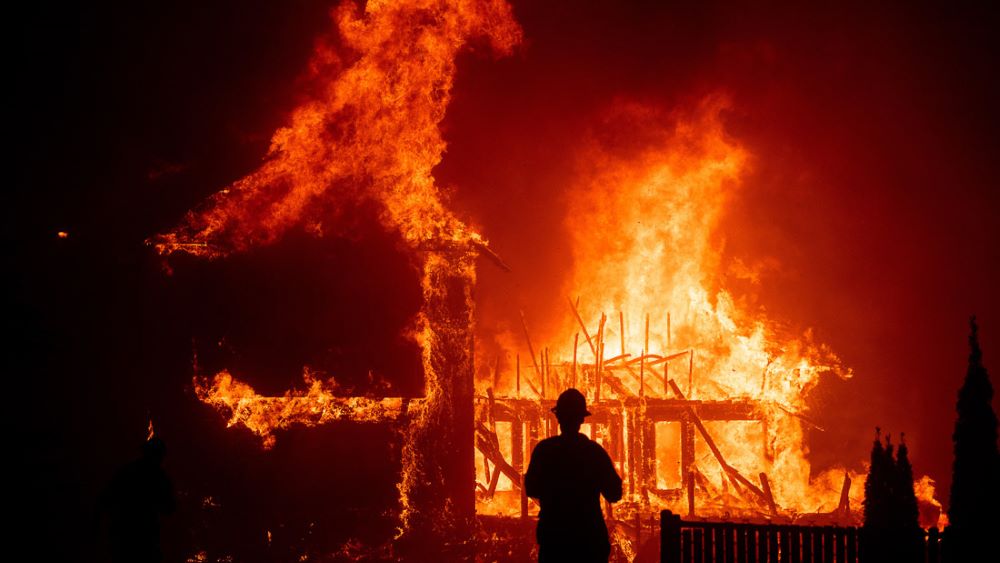 It began as a spark flickering from a near-century-old transmission electricity line in the foothills of the Sierra Nevadas during the early morning of November 8, 2018, nine miles east of Paradise, California (pop. 26,000). Aided by an accelerant combination of long-term drought conditions and strong downward winds, the ensuing wildfire quickly transmuted into a raging inferno, reaching the unaware community with the blissful name around 8am as it incinerated everything in its path. With little time to flee, most of the town’s residents rushed to evacuate the area in a surreal caravan of gridlocked vehicles on the town’s only escape route. From behind those windshields, Paradise appeared as an unrecognizable Hell, enveloped by a pitch-black darkness of thick smoke and illuminated by flanking walls of flames spreading spider-like across the roadway. Hours later, the town was an ashen cemetery of smoldering cement slabs and burnt-out automobiles. Almost everything was gone. The final death toll climbed to a staggering 85 persons. Waking from their Camp Fire nightmare, many of the shell-shocked survivors, particularly the lifetime residents for whom the town meant so much, dared to dream: Could their Paradise lost be regained?

After using news media coverage and cellphone video footage to visualize the horror of that harrowing experience in the prologue of this deceptively straightforward documentary, director Ron Howard gets down to business in vérité style to chronicle the aftermath of the catastrophic event through the perspectives of local citizens: the school district superintendent, a policeman (a dead ringer for Ryan Reynolds), a former mayor, a couple of high-school seniors, and two struggling couples with small children. The fallout from the most destructive wildfire in California history goes well beyond the adverse financial impact on its PTDS-afflicted residents, complicated by the bureaucratic hoops of FEMA assistance. Toxic benzene pollutes the drinking water; exposed asbestos poses health hazards; housing becomes scarce; spouses divorce and families split up. A humanist at heart, Howard doesn’t sentimentalize the plight of these everyday folk. He even refrains from passing explicit moral judgment on behemoth Pacific Gas & Electric, the villain of the piece responsible for the deadly wildfire (there’s Erin Brockovich and a class action lawyer!), though the angry town hall meeting in which a PG&E spokesman is verbally pilloried by what one resident describes as “a broken people” has its own perverse pleasures.

Rebuilding Paradise speaks to the resiliency of human beings, and maybe something about the American can-do spirit. There’s a sense of legitimate optimism when ground is broken to construct new homes around the one-year anniversary of the Camp Fire. But when the film’s final minute becomes a newsreel of “natural” disasters around the world, all undeniably linked to climate change, it becomes apparent the film’s agenda goes well beyond this terrible single instance of human pain and suffering. This is but one story of many, and many more to come, unless the paradigm shifts. Sly move, Mr. Howard. Sly move.

Rebuilding Paradise is available as a Virtual Cinema release. Choose from: