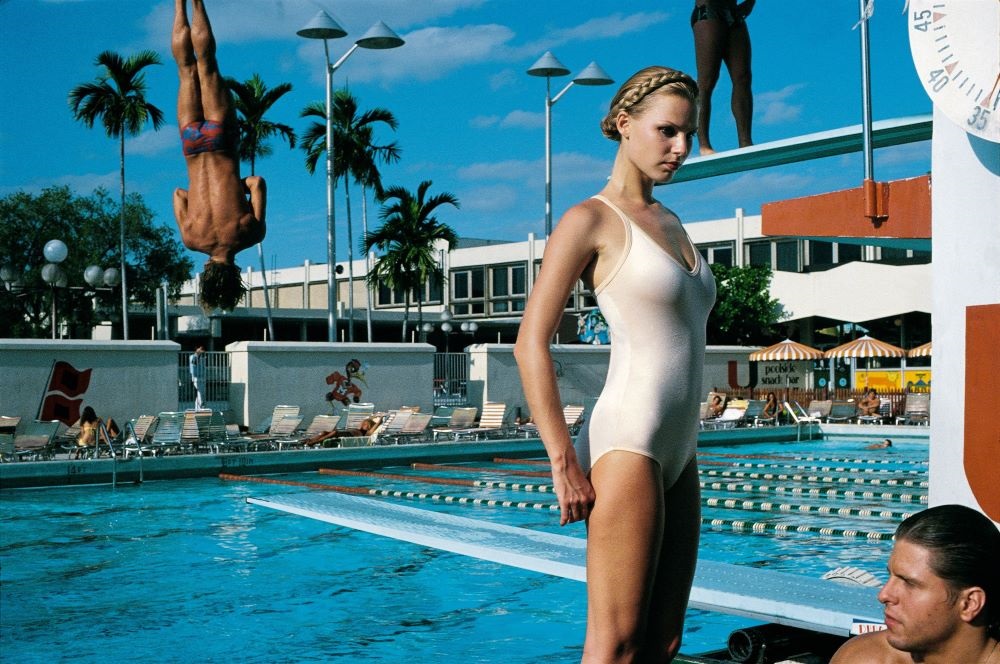 Helmut Newton: The Bad and the Beautiful

It's not hard to imagine that documentarian Gero von Boehm would see that as the ultimate challenge, having already said as much as there was to say about a host of dissident and transgressive talents – American novelists like Norman Mailer, Gore Vidal, and Henry Miller, and French photographer Bettina Rheims. This would be a double-dog-dare as Newton's wife, June Browne, had already given her husband the most intimate portrait in her 1994 video profile, Helmut With June. What's left to say, except to mention and mourn his 2004 death – oddly fitting for the master of menace and glamour, as Newton smashed his car into a wall on Sunset Strip, coming out of the legendary home of LA celebrity hedonism, the Chateau Marmont.

Of course, Newton needs no introduction. His look, as explained by Vogue editor-in-chief Anna Wintour (one of a host of talking heads featured here among the archive footage), was instantly recognizable and shaped how haute couture appeared in 1980s glossy fashion magazines: Bold colors or stark black-and-whites, with infinite depth of field, populated by statuesque women perched somewhere between strength and peril. His glamazons were sculpted, sexual, enigmatic, daring, romantic, erotic, subversive. He was the fashion photographer fundamentally disinterested in fashion, whose aesthetic happened to coincide with the look that designers like Karl Largerfeld and Ralph Lauren craved and sold. It's clear throughout that Newton was having a whale of a time creating his images – little saucy slices of Hollywood noir, all poolside voyeurism and hotel encounters – and convincing some of the world's most beautiful women to disrobe in front of him. For some, such as Marianne Faithfull, they found a new part of themselves that they could reveal; others, like Claudia Schiffer, look back on him with unexpected fondness for the distance he put between their real selves and the image. It was that distancing that caused Susan Sontag (among others) to dub him a misogynist, but the women that worked with him see a different side. "He was a little bit pervert, but so am I, so it's OK," Grace Jones giggles with a leer as she recalls the man who called himself Wintour's "favorite naughty boy."

The most intriguing decision that von Boehm makes is that Newton's is the only man's voice here, in snippets of archive footage and a handful of interviews before his death. He photographed men (often, as a story about his portrait of French fascist Jean-Marie Le Pen reveals, as the butt of an elaborate joke), but it was women who were his obsession – and they rightly get their response. Most importantly, June, who become a respected photographer in her own right under the pseudonym Alice Springs, is given her own voice within the context of his work and life. Considering his career was built around taking photos of naked women often a fraction of his age (and revealing his obvious kinks in the process), the remarkable nature of their 56-year marriage only adds more depth to an already fascinating story.

If von Boehm adds anything to what's known of Newton's life, it's to explore his iconography, about which he was very honest. His dismissiveness of photography as insightful, his enigmatic storytelling, and the great contradiction of his work, of how a young Jewish boy who was almost murdered during Kristallnacht absorbed so much of the imagery of the Reich's most artistic propagandist, Leni Riefenstahl. Like the director of Triumph of the Will, his fascination was with physical perfection – yet while she placed her subjects on a mythological pedestal, Newton offset the real world by his utter opposition to naturalism. Possibly this could be better explained if von Boehm had spent a little more time discussing Newton's other great Teutonic influence, filmmaker Erich von Stroheim (whose impact on the photographer's work is mentioned only in passing), or the unmentioned connection to nude photostories and pulp girly mags with salacious titles like Beau Femme and Escapade.

Oddly, Helmut Newton would make for a surprisingly fitting double-bill with another recent documentary about an icon of fashion photography, Mark Bozek's The Times of Bill Cunnigham. On the surface, it would be a depiction of opposites: Cunningham was a street photographer, a self-deprecating snapper with an astounding eye and a quick finger, while Newton constructed his universe to the smallest detail. And it's not that they both regarded the idea of a filmmaker following them around as abjectly ridiculous (although Cunningham was as disarmingly self-deprecating of the idea as Newton was dismissive). It's the the fact that, against all odds, these two badly-dressed, unimposing men had found the perfect outlet for their desires: Cunningham to bear witness to the world, Newton to remake it on his own terms.

Helmut Newton: The Bad and the Beautiful is available as a virtual cinema release now. Choose from:
• Violet Crown Cinema (Tickets here)

Helmut Newton: The Bad and the Beautiful, Gero von Boehm