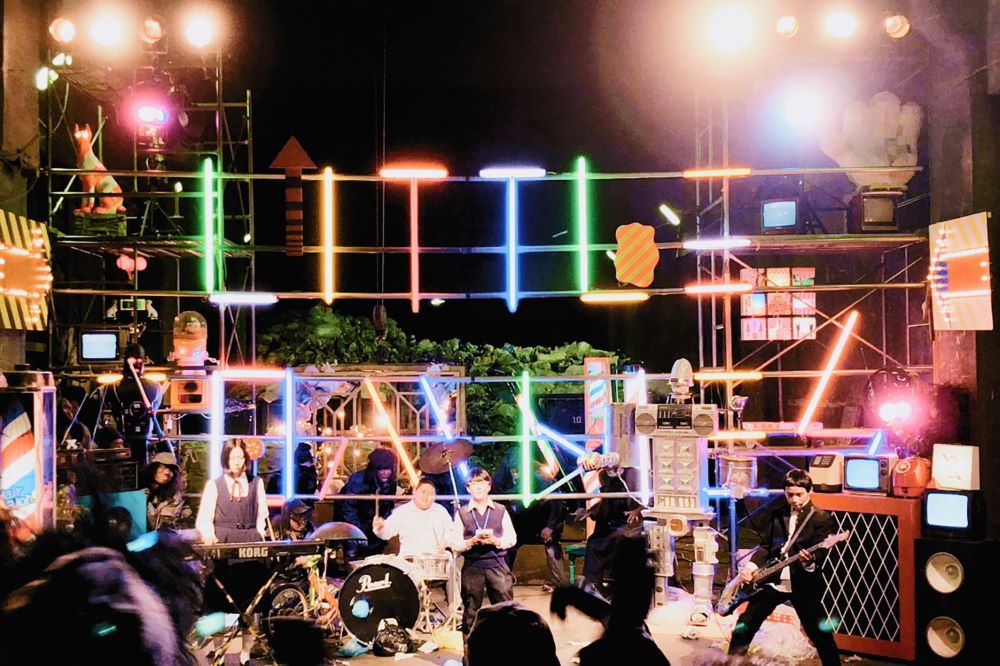 We Are Little Zombies

Nihilism is the most misunderstood philosophy. It gets bundled together with all kind of selfish and mean mindsets. Instead, it's summed up in a moment in first-time filmmaker's Makoto Nagahisa uniquely fresh and entertaining comedy-drama. A small boy is shoved into a locker, which is then tied up with ropes and rolled down a hill by his laughing classmates. A passing family initially mistakes him for a vampire emerging from a coffin - and when they discover he's just a bullied boy, their interest drops.

His response? To apologize for not being more interesting.

"It's no big deal" is the response to everything from a quartet of kids who meet round the back of the crematorium where their parents are on their way to becoming dust and bones. There are no tears (what's the point?) but they have being alone in common, and that's enough. The world of these four orphans is completely arbitrary, and that's been re-enforced by the ways their parents died. Their passings were ridiculous, sad, inevitable, unexpected, and their explanations are key to how locker-kid Hikari (Ninomiya) introduces the audience to his new friends: Yuki (Okumura), who acts out by shoplifting as a way to deal with domestic abuse; Ikuko (Nakajima), who has been so overly-sexualized by the adults around her that she feels she has to manipulate them; and Ishi (Mizuno), for whom food is conflated with love. Life wasn't that great before their parents died, and it's not that different now. So why not head off on an honest-to-goodness adventure? After all, they've assembled the classic fantasy party (the wise protagonist, the rogue, the bumbling fool, and the token woman), so why not?

Nagahisa's version of contemporary Japan is a video role playing game, with cut scenes, save points, bizarre missions, oddball characters, and unexpected song-and-dance sequences, (plus, as is often the signature in Japanese gaming, a loaded political context), all illuminated by Hikari's neon-glazed handheld gaming console. Games were the only way his parents expressed what passed for love, and he clings to it, much as Ishi keeps eating even though he's lost all sense of taste. Does that make sense? Of course not, but then neither does their run-in with an orchestra of homeless people, which leads to a career as a pop band called We Are Little Zombies, complete with corporate exploitation (cue a Tommy-esque exploration of celebrity), and a particularly pointed take on faceless online mobs that put the fanatic into fan. (In the wake of the suicide of professional wrestler Hana Kimura after online bullying over her appearance in the reality TV show Terrace House, those scenes have a new and added poignancy).

What's incredible is that this never feels stylistically or tonally erratic. If there are signposts, it's the controlled chaos of Takashi Miike's The Happiness of the Katakuris, or Jang Joon-hwan's Save the Green Planet!, or Sion Sono circa the equally kinetic and delightful Tokyo Tribe and Love and Peace. But Sono was three decades into his directing career when he pulled that off, and from day as a feature director one Nagahisa mixes that same blend of visual eclecticism. It makes the wild visual adventures of his debut, 2018 award-winning short "And So We Put Goldfish in the Pool," feel like the perfect prelude, with its deep empathy for how complex it is to be a kid in a world that barely recognizes you're there (he test drove the idea of diffident youth as metaphorical zombies there, and finesses it here). Yet he off-sets that potentially bleak message with incredible visual verve - not just the constant vibrant gaming framing mechanism, but remarkable flashes a strangely vital fish-eye view of the world, and the only tracking shot so far this year to match the jaw-dropping oner that helped make The Vast of Night so memorable. This isn't just misery tourism, but a wild trip into the teen psyche, in all it's fresh smartness and surprising durability.

Nagahisa's script dares to embrace true nihilism: not selfishness, not posturing decadence, but the genuine commitment to your core that the meaningless of the world isn't a bug, it's a feature. These zombies may be dancing in the trash, but at least they're dancing.

We Are Little Zombies is available now as a virtual cinema release. Choose from:
• AFS Cinema (Tickets here) 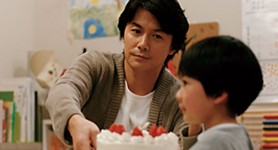 Like Father, Like Son
In this movie from the always perceptive Japanese filmmaker Hirokazu Kore-eda, two families are uprooted by the belated knowledge that their babies were switched at birth.