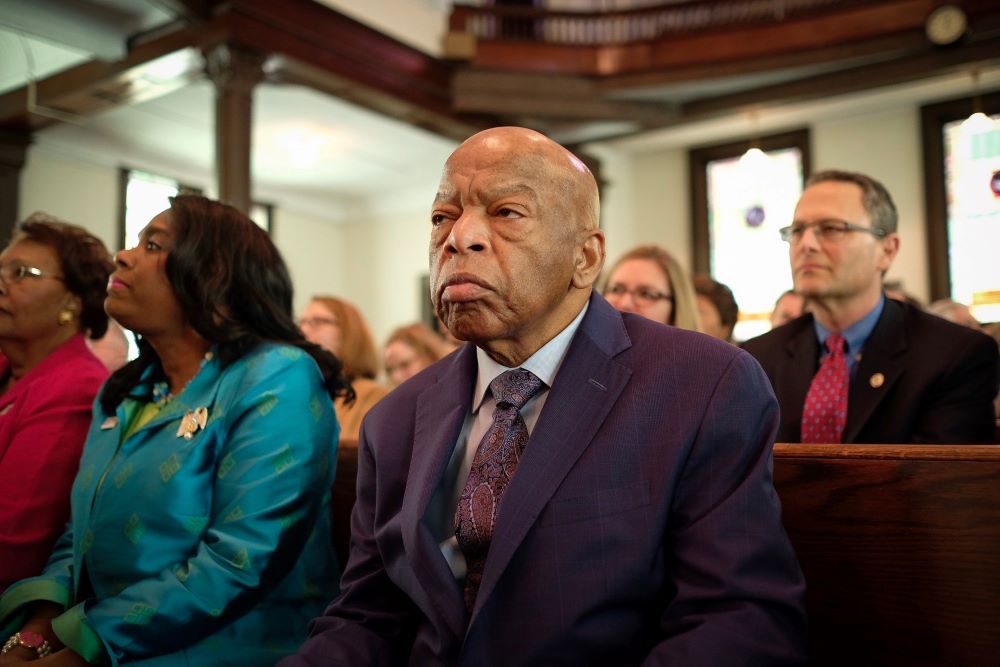 This richly deserved tribute to the indefatigable John Lewis, the pioneering civil rights activist and longtime Georgia congressman, is yet another sobering reminder that the fight for social and racial justice in this country is a struggle that seemingly never ends, one a nonetheless ever-optimistic Lewis has doggedly waged all his adult life. Even today, at the way-past-retirement age of 80, he remains a moral compass on Capitol Hill at a time when so many there have sold their souls to the devil. This hard-working, 17-term member of the House of Representatives spends much of his time these days battling the evil and regressive campaign of minority voter suppression and disenfranchisement in his home state and elsewhere. At one point in the documentary, he jokingly boasts he’s been arrested 45 times, and it’s evident he’s willing to go to jail again to advance that or any other worthy cause. As Good Trouble quickly demonstrates as it follows this tireless octogenarian on his daily rounds, John Lewis is never one to rest on his laurels.

The son of sharecroppers from rural Georgia, Lewis stands tall in the annals of this nation’s civil rights movement, bearing witness to a tumultuous social and political history shoulder to shoulder with men like Dr. Martin Luther King and Ralph Abernathy. (He is the only surviving speaker at the 1963 March on Washington.) His body has the scars to prove it, though he (both a “gentle man” and “gentleman”) has always fervently embraced non-violence in his activism. As a college student in Nashville who co-founded the Student Nonviolent Coordinating Committee to register Black voters throughout the South, he helped organize and participated in the 1960 sit-ins at the city’s downtown luncheon counters that ultimately became the first eating establishments in a major Southern city to allow Black and white people to dine together, and he subsequently became one of the original 13 Freedom Riders protesting the unlawful segregation of interstate buses. As this film graphically shows, those efforts were not without physical violence against Lewis and his fellow activists. More infamously, when he and others attempted to cross the Edmund Pettus Bridge on the way from Selma to Montgomery in March 1965 on a day now remembered as “Bloody Sunday," Alabama State Troopers mercilessly beat the peaceful protesters in dispersing the crowd as a shocked world watched, seriously injuring Lewis with a fractured skull. Plus ça change, plus c'est la même chose.

While the chronology of certain events in Lewis’ amazing life can be slightly confusing at times here, the film nonetheless evidences with powerful clarity the accomplishments of a man whose unwavering credo has always been – and continues to be – to stir up “good trouble” whenever warranted, highlighting the litany of important and ground-breaking federal legislation he has sponsored during his 30-some-odd years in Congress. It’s no wonder both the congressional new guard, like freshman representatives Ilhan Omar and Alexandria Ocasio-Cortez, and old guard, such as Speaker Nancy Pelosi and others, sing his inspirational praises here. If ever an individual in today’s dysfunctional political world is to be admired, it’s this man.

Director Porter has done an excellent job assembling archival footage and interviews to tell Lewis’ story; she has the markings of a great storyteller. Occasionally, she captures him watching some of that footage (in one instance, for the first time), and the effect is mesmerizing. You can read into his steady gaze both pain and pride as he relives those moments, when the dream of “We Shall Overcome” must have often seemed so elusive, just as it continues to elude in so many ways today. The timing of this movie celebrating this American hero is opportune. Do yourself a favor: See it, and learn. What you may do afterward is entirely up to you.