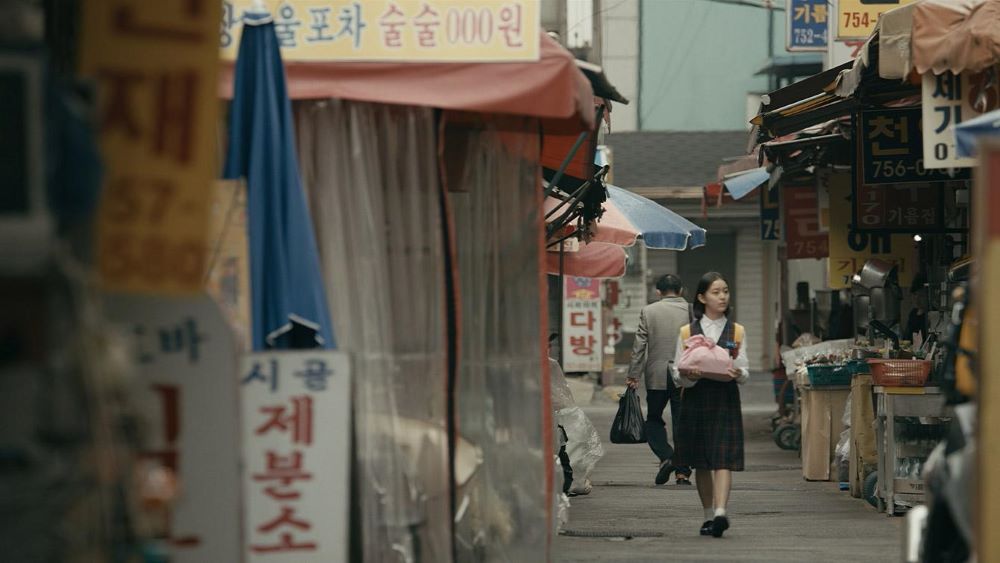 There are few more important desires in the life of a teenager than to be seen. For Eun-hee (Park), it's everything, a force that dominates her entire life as she stumbles through being 14. And why wouldn't she? She's not awkward or weird enough to be an outsider, but not cool enough to be looked up to at school. She has friends, but she's not popular. Her parents rely on her, but they don't really notice her, not when they have her perfect student brother and troublemaker sister to look after. She's the kind of kid who would fill out the crowd in other films, but in Bora Kim's quiet coming-of-age drama House of Hummingbird, the anguished anonymity of adolescence requires a less-than-proactive protagonist like Eun-hee.

That's why she drifts towards anyone that will recognize her, whether it's boys or girls in her class, or the new teacher, Yong-ji (Kim), at her cram school. It's why even a strange growth on the back of her ear is almost a welcome friend - at least her parents have to look at her, think about her, care what happens beyond whether she makes her next shift at their little rice cake store.

First-time feature director Kim pulls every moment back its most quiet and intimate, instead letting the ambiguity of personal moments play out. Most importantly, she keeps newcomer Park's performance as Eun-hee in constant focus at a time when she barely knows herself, and definitely doesn't understand other people. That awkwardness, Kim suggests and Park perfectly projects, isn't selfishness, but part of the act of growing up. It's not being noticed, but being able to notice others. That's all tied in with the background noise of two major events in this period piece - the death of North Korean dicator Kim Il-sung and the tragic Seongsu Bridge collapse - incidents that Kim herself has referred to as childhood's end for modern South Korea.

That there is less a plot than a series of events is what distinguishes House of Hummingbird as a character study. What's important is that Eun-hee is not all of who she will become, but that she finishes the film more capable to face the arbitrary nature of life. If there's a recent American film to which it can be compared, it's the seemingly unrelated The King of Staten Island. Both characters are forced to mature on a timeline not of their choosing, and in the shadow of disaster. Yet in neither case are such tragedies are a positive: instead, that they cause ripples that change who we are. As Blink 182 so astutely observed, I guess this is growing up.

For an interview with director Bora Kim, read "House of Hummingbird Explores the Adolescence of a Woman and a Nation," June 14, 2019.

House of Hummingbird is currently available as a virtual cinema release. Choose from: