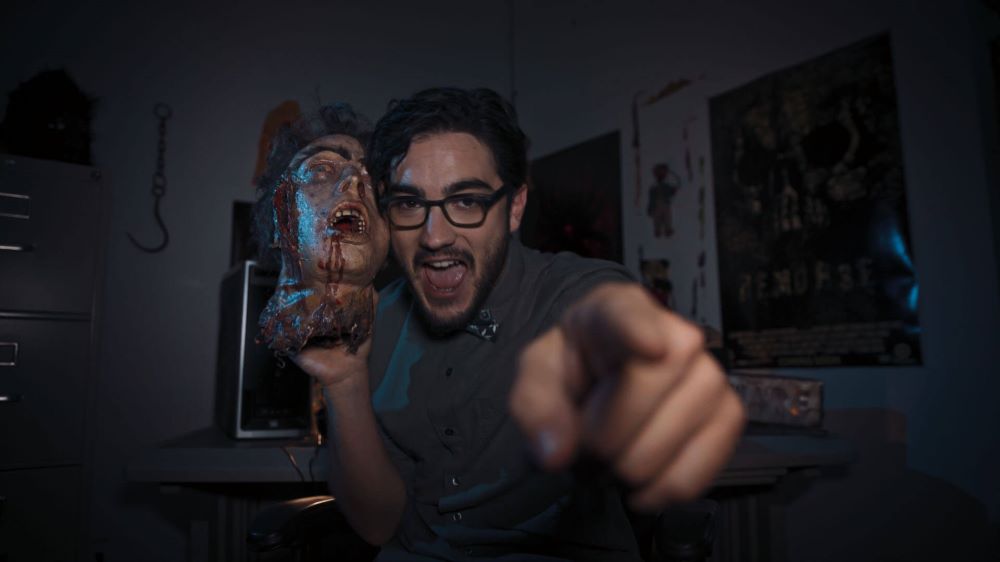 "I'm a vlogger!" exclaims annoying Zak Bagans knock-off DropTheMike (Solomon). He's the host of a low-rent supernatural streaming show, gallivanting around the sites of old tragedies and treating it all like it's some kind of goof. He's the kind of irritating influencer who refers to his audience as "my minions" and depends on the misguided support from old friends to make his show. He drags them into his dumbest excursion yet, to spend Halloween vlogging from the incredibly haunted Lennox Hotel. Its not just your average haunted hotel: It's also where a satanic serial killer butchered and violated 14 people three decades earlier.

Followed comes across as a combination of found footage and the new wave of screen reality cinema, the latter form innovated by horror films like Unfriended and pushed into new territory by thrillers such as Searching and Profile. Screen reality (or, as the producers call it, screen life – the argument is seemingly yet to be settled) revolves around the whole film looking like a stream from a remote desk top – a familiar sensation for so many people currently working remotely on their work machine. In this instance, the first mystery is who exactly is uploading Mike's footage to his website, and why they have chosen now – months after the show collapsed into bloody, mysterious chaos – to make these missing files available to the world.

On the surface, Followed is a little too close to the Hell House LLC series, seen in horror circles as the grungier underground heir to the increasingly overblown Paranormal Activity franchise. It hews close to core idea of terror-obsessed professionals (in Hell House's case, haunted attraction operators) playing too hard with the stories of a cursed hotel, but the story is different because of the characters. The Hell House team are professionals who are unwittingly dragged into the inferno: DropTheMike brings this all on himself, as his increasingly unwilling camera operator, Chris (Drier), keeps reminding him. Honestly, for the first half of the film, the only reason you won't want to see Mike get maimed by spirits is because they may take his crew too, and the slow unraveling of editor Nic (Utting), unnervingly mostly happening off-camera, only adds to the tension.

This is also one of the few recent American horror films that makes smart use of an urban setting, and throws in a few true-crime references to boot. The Lennox uses the historic Hotel Hayward, slap bang in downtown LA, as its location, but it's really modeled on the infamous Hotel Cecil, a flophouse that saw Richard Ramirez, aka the vile Night Stalker, and Australian serial killer Jack Unterweger both fill out the guest book. The script makes more than over nods to both, and to the 2013 footage of Elisa Lam – famous for her erratic behavior in an elevator security camera – and there still may not be quite enough historical distance since her sad drowning and this fictionalized version for some.

If that plot point may be too soon, the film itself is weirdly timely. The claustrophobia of our pandemic digital existence adds to the later scenes, even if they are the classic single-shot mad dash through the insanity; moreover, the reveal for why Mike is so determined to do something so dumb as wake the dead adds a surprising poignancy to the well-executed chills.