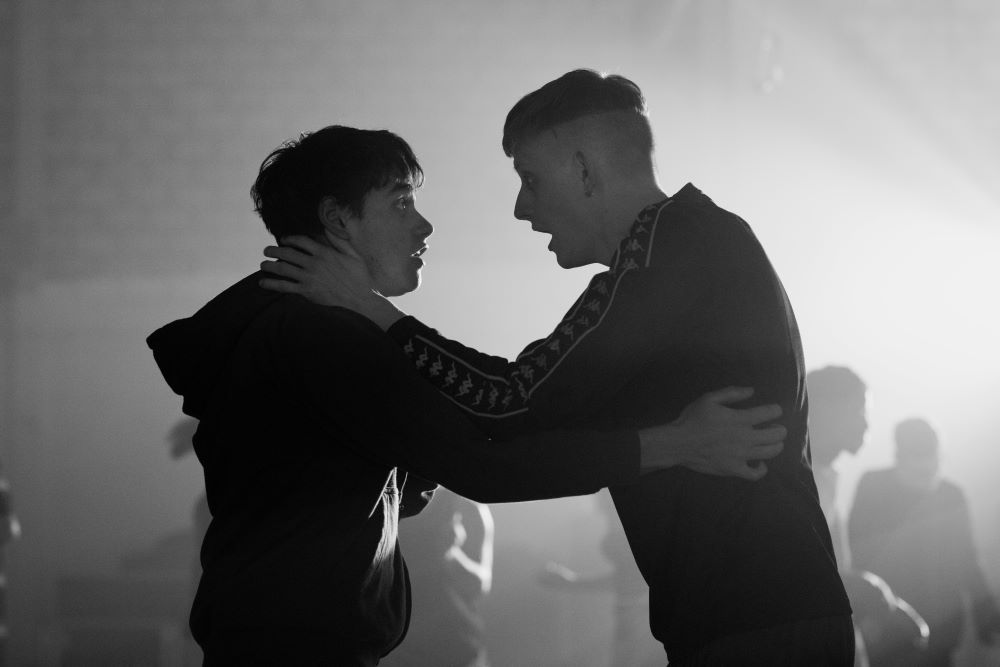 When the landmark Scottish rave-and-scag drama Trainspotting finally arrived on American shores, the scene it showed was dead and being buried. In the four years between Irvine Welsh's portmanteau novel being published and Ewan McGregor's star-making turn, it had gone from the underground music of rebellion to watered-down chart pap. The last nail in the coffin was the Criminal Justice and Public Order Act of 1994, which explicitly targeted unlicensed raves - although the commercialization of the scene had arguably placed the lid on the casket years earlier. Yet Beats, Brian Welsh's adaptation of Kieren Hurley's 2012 one-man play, sees the law as the end of this world.

In this period rave drama, set in the small postindustrial town of Livingston, the world's definitely changing for nervous Johnno (Ortega) and his charity case friend, Spanner (Macdonald). Aged 15, the good times they were promised have collapsed as rave culture is set to roll up. Worse, Johnno's mum (Better Call Saul's Fraser) is moving him to the suburbs, away from their shitey rental house and away from Spanner and his drug-dealing brother, Fido (Leiper). Rumors of one last big rave before the scene collapses stir the pair to their one and only major act of rebellion.

Beats catches the misery and desperation that powered rave culture and the era of DayGlo shell suits. The disappointment is that the Welsh strips all the color out of Hurley's vibrant play, which he originally staged with a live DJ accompaniment. Literally, he removes the rainbow: Shooting in black and white, the film loses the charismatic kinetic fury of a one-man-show. There's also a sense of conflating the decade with Tony Blair as the authoritarian bogeyman on the TV (it would be another three years before he would move in to No. 10, and seven before he really stomped on the dreams of young Britain). The loss of context stretches to the characters, and most especially ill-served is Ferguson as Robert, Johnno's policeman step-father. Welsh's script pulls out important backstory that fits rave into longer cycles of rebellion. Not to depend too much on the Irvine Welsh references, but cutting that out is like cutting out Begbie's origins in Trainspotting - a blunder that Danny Boyle later regretted.

If the big picture seems blurry, the details are right. Passing the hat for petrol money, hanging out in abandoned factories (which were in ready supply after Thatcher), and even shooting the climax in the old Arches in Glasgow, both a famous rave venue and a home to experimental theatre productions - including Hurley's play. Yet the best details are in how Ortega and Macdonald sketch out the intricacies of adolescent male friendship of the kind that goes back to childhood. They can share a bed but there's nothing sexual about it, because they've been doing it since they're five. The script may be a bleaker take on a tale we've seen so many times before, but their trembling steps toward adulthood hit the right rhythm. It may be Detroit Rock City with more E and more social realism, but those twists raise it above many of its predictable peers.