The worst kind of baggage is the kind we make others carry. Yet Turquoise Jones (Beharie) doesn't realize that's exactly what's happening in her relationship with her daughter, Kai (newcomer Chikaeze). When she pressures her only child to enter the local Miss Juneteenth competition, all she sees is legacy: the history of the Juneteenth celebrations in Texas, what it means to be a young Black woman in Texas, the importance of winning and getting a scholarship and going to college. But what Kai sees is the burden of living up to her mother's expectations, and filling in for her failures and shortcomings while ignoring her own dreams.

In her remarkable, warm, and sometimes delicately sad debut feature, writer/director Channing Godfrey Peoples sees both sides of this intergenerational struggle. What's truly special is that she avoids any histrionics. Ever since James Dean screamed "You're tearing me apart," filmmakers have craved that emotional explosion, but Peoples paints life in this Black working class Fort Worth neighborhood in softer tones.

Inevitably, race and class pervade Turquoise's experiences and the nature of the film. Just about every face on screen is Black, and there's a deliciously pointed conversation between Turquoise and a white store assistant about layaway that lands sharp and hard. But Peoples really gives an insight into the shifting discussion of what it is to be Black in Texas right now – not as an outward signifier to white America, but as an internal identity, one that evolves like everything else. It's in the way Kai bristles as she has to show she knows the difference between a dinner knife and a salad knife, and rejects her mother's efforts to get her to learn Maya Angelou's "Phenomenal Woman." For Turquoise, that's tantamount to rejecting a holy text but also an attack on her own identity (it is, after all, the poem with which she had won Miss Juneteenth). But that's how paternal barbecue joint owner Wayman (Mauldin) feels when Turquoise suggests taking out some loans to improve the bar, because he grew up when the goal was to be free and clear of any debt to white folks. Their fights are as threaded with love and history as her broken relationship with her mother (Hayes) – rolling drunk one day, holy roller the next.

In less apt hands, the SXSW-award-winning Miss Juneteenth could be cloying, with some elements – such as Turquoise's love triangle with Kai's father, Ronnie (Sampson) and local funeral home director Bacon (Watson) – verging on melodramatic. Yet Peoples pulls back any sappiness by wisely letting the quiet, almost-verité cinematography of Daniel Patterson (The Last O.G., the TV version of She's Gotta Have It) do much of the work. Similarly, there's sparing use of Emily Rider's score, supplemented by diegetic rhythms from the bar and the street.

What that really allows her to do is focus on the performances, most especially a true workshop in understatement from Beharie in constructing Turquoise. Her inner conflict – that she wants her daughter to be like her but without her flaws and self-perceived failures – plays across her face in the tiniest upturn of her smile, the furrowing of her brow, her preciseness even in exhaustion. She's not tired, she is exhausted by everything and everyone, but she will not quit. Her story, of growing by learning that compromising isn't conceding, is quietly, wonderfully powerful. 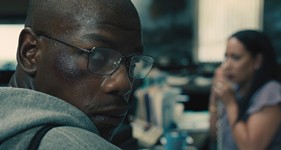