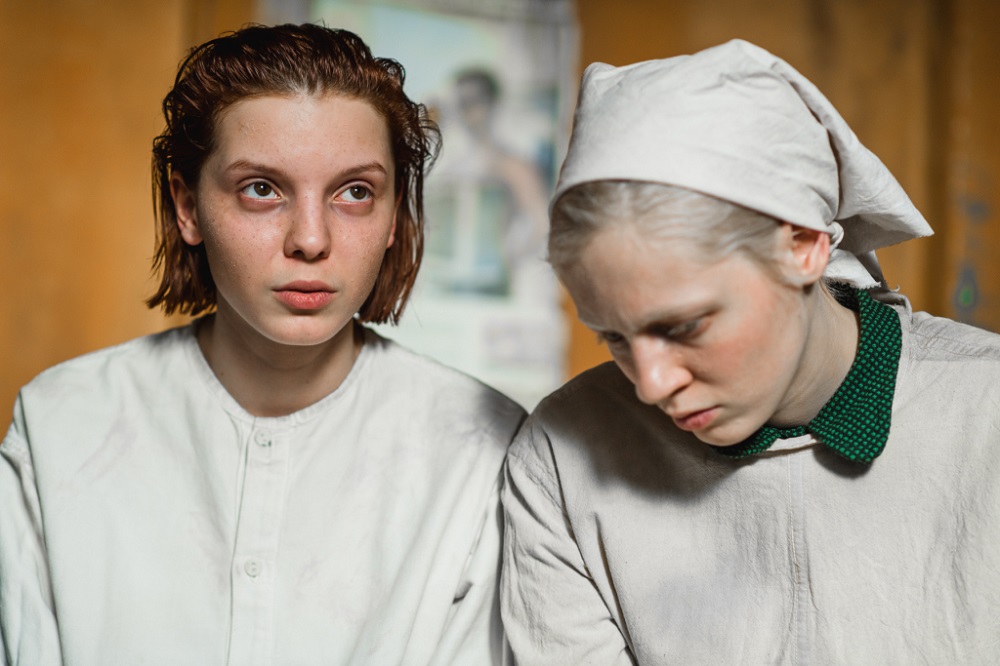 One of the defining traits of post-World War II America is the idea of the honorable war. Moreover, it's the idea of war being something you go elsewhere to do. That's easy to believe when you haven't had a real conflict on your nation's soil since 1865, and every war after that has ended with triumphant homecomings.

When the battlefield is your streets and houses, it inevitably leaves bullet holes in your psyche and culture. There's a more brutal immediacy, even generations later, when you can never leave the conflict behind, even when the guns have been silenced and the bloodstains have been scrubbed down.

That's the context of Beanpole, but with an added tension of an under-told story. Unlike most European countries during World War II, Russia conscripted women as frontline fighters. Their narrative has been consistently ignored in Russian cinema, especially as that nation's war films have become increasingly patriotic and bombastic. Not in Balagov's Beanpole, which opens with a women locked in a catatonic state. She is Iya (Miroshnichenko), the titular Beanpole. In happier contexts she would be described as willowy, but in Stalingrad in 1945, with the war barely over, she is a ghost. She has post-concussion syndrome, a disorder that leaves her stock-still at a moment's notice. It happens often enough that the fellow nurses at the veterans' hospital at which she works as a nurse just work around her when it happens. Her injuries are more obvious than those of her best friend - maybe only friend - and fellow veteran, Masha (Perelygina). Iya was sent home from the front early, and has been caring for Masha's son, Paschka (Glazkov). Widowed, carrying a deep wound so savage that it break the surface in a broad but easily hidden scar, she comes back for her child and her friend. But a slip, an unavoidable and tragic accident, sends both women to a different, codependent path.

Many American observers have lionized the Russian women who became snipers and bomber pilots during the war as feminist trailblazers - in the process ignoring the immense damage done to them mentally and physically. Drawing heavily on Svetlana Alexievich's groundbreaking work of oral history, The Unwomanly Face of War: An Oral History of Women in World War II, director Balagov (who cowrote the script with Aleksandr Terekhov) instead explores their trauma, and the ways they scrabbled to make it through the days, hanging on to anything that got them through. Moreover, they have to keep going when they are clearly as broken as the male veterans for whom they are expected to care.

Neither Iya or Masha (in astounding first-time film performances by both women) know exactly what they want, and it is in their path to fumbling towards that understanding that they show compassion, cruelty, longing, forgiveness, and flashes of joy that fracture into melancholy. Romance is mythical: Sex, transactional. Their inner emotional lives are expressed through a sometimes not-so-subtle interplay of bloodstain reds and verdant greens: The color scheme becomes so ubiquitous that an injection of clean creams in a visit to a countryside dacha, a last bastion of privileged gentility in a time of scars, inside and out.

The real story is not of a relationship or even friendship between the two women. It's a compact, one forged in blood and loss and desperation. Even when Masha is followed by Sasha, the besotted son (Shirokov) of a local aparatchik, everything is about the bind between the two, of unspoken debts and obligation, and most importantly of their sense of understanding. Only they can truly recignize each other, as only they have been through the same cruelties.

If there's one issue with Balagov's work here, it's that the cruelties can be a little too overt (there's one early sequence with a young actor that it's hard to see how it was caught without crossing a line in on-set performance). Beanpole doesn't need those moments when it has elements like a crushing conversation between Masha and Sasha's mother (Kutepova), or the compassion the nurses show for the doomed and near-dead in the hospital. There is no happy ever after, Balagov suggests - merely the hope that happiness can be possible.