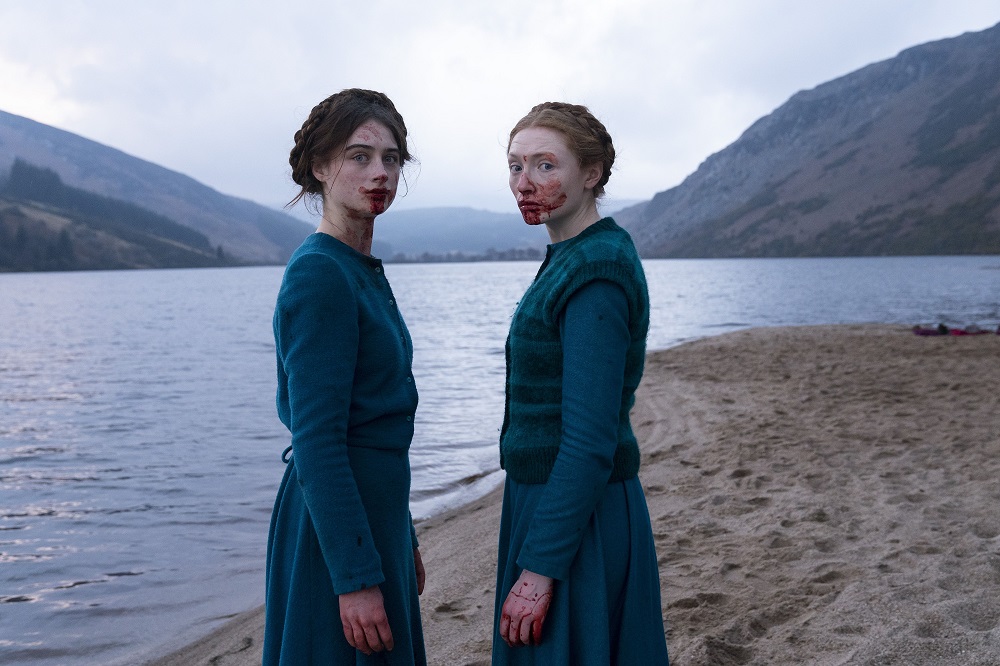 When self-proclaimed prophet Warren Jeffs was arrested for running an incestuous rape cult, the first two thoughts that went through most people's heads were, "How disgusting!" and, "Wait. That guy?"

The truth is, charismatic cults are hard to explain. The sheer amount of work that it takes to groom, brainwash, manipulate, and maintain a huge number of acolytes seems astounding. That is always the drama in cult horrors, of the moment when the messiah makes a critical mistake and their carefully-constructed sect falls apart around them.

In The Other Lamb, it's when the self-anointed Shepard (Huisman) fails to see the growth of his daughter-wife, Selah (Cassidy). She is the most devout of his all-female followers, and disturbingly fixated of receiving his grace (which is exactly the metaphor you think it is). Yet in the competitive little world of that he has constructed, a rural nowhere and nowhen where daughters and mothers compete for his favor and fear his wrath, her faith quickly becomes a greater destabilizing threat than any apostasy.

Yet, as Selah, Cassidy's performance is hampered by flashbacks and fantasies that are meant to illuminate her complicated inner life, but instead flatten it out into a monotone. Meanwhile, Huisman (best known as the eldest adult Crain child in The Haunting of Hill House) has little to do beyond whisper seductive threats.

It's not that there isn't a solid narrative tradition of rebellion against patriarchal cults behind this, one that has been told before in seminal retellings like Danny Boyle's adaptation of Mr. Wroe's Virgins, and it is one that gains different meaning through each contemporary lens. It's that The Other Lamb takes it for granted that the audience understands charismatic sex cults, and then just plays through the tropes. There's a lack of freshness (can any metaphor for religious adoration be more generic than sheep and shepherds?) at the forefront. Meanwhile, set dressing choices, like the web of yarn through the trees of the cult's woodland home, give intriguing hints at a more complicated mythos, but are never built upon or truly integrated.

Take one specific moment, with a flayed newborn, that should be laden with symbolism. The way it has been skinned is very specific, a sheep farmer's technique for getting a ewe who has had a stillbirth to adopt an orphan or a rejected twin: skin her baby, and tie the skin to the other lamb. It's a tiny moment that no one except people who grew up around sheep will get, but it's an opportunity to hide a layer of meaning. Instead, it's just a gross image, beautifully shot.

Cinematographer Michal Englert does solid work, pulling together a palette of mottled blues and earthy greens from his Irish locations filling in for somewhere unstated in the U.S. Yet it lacks the sense of muddy wonder caught by Joshua James Richards for God's Own Country, or Adam Etherington's mist-shrouded dankness in Welsh rural horror Gwen, or the way that Tom Comerfeld saw the enigma of woodlands in The Hole in the Ground - three recent films from the British Isles that felt like they brought something fresh to depictions of the mossy, rain-lashed hillsides. Englert's work here doesn't feel derivative, but it's not innovative.

That's The Other Lamb in its entirety. While Szumowska (in her English-language directorial debut) and scriptwriter C.S. McMullen handle the archetypes of a cult narrative well, and are not afraid to suggest that the damage of indoctrination cannot easily be undone, the sprinklings of mystery in the background would possibly have become more intriguing as actual structure.

The Other Lamb is on VOD now.