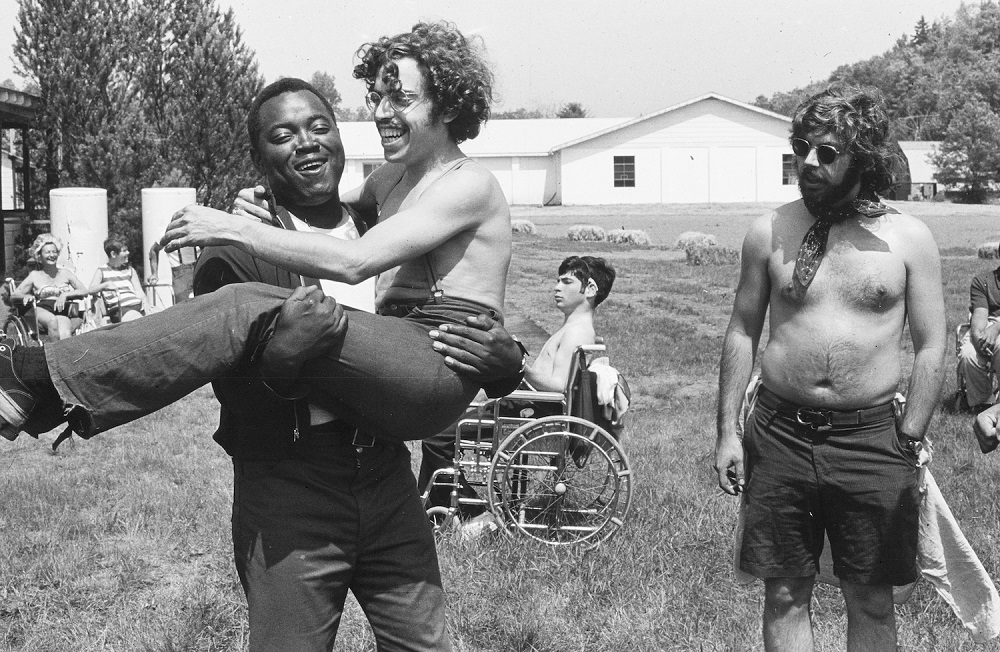 Crip Camp documents another era. That’s obvious straightaway, even before you absorb the aged media it draws from – smudgy black-and-white photos, half-inch videotape, grainy Super-8 – or the time-capsule clothing and hair, all bell bottoms and oversize ombre owl eyeglasses. It’s right there in the title. The film documents an era when “crip” was a word people just used, and it documents a place – Camp Jened in New York state – where some extraordinary individuals met, found kinship, and eventually helped power a movement to advance disability rights in America.

Another impactful effort from Barack and Michelle Obama’s Higher Ground Productions, a production company in partnership with Netflix that released 2020 Best Feature Documentary winner American Factory, Crip Camp doesn’t strictly chart the history of Camp Jened, which opened in 1951. Instead, the film picks up in 1971, when it had morphed into – as one alum describes it – “summer camp for the handicapped run by hippies.” Utilizing footage shot by the short-lived People’s Video Theatre of Brooklyn, co-directors Jim LeBrecht (a former camper heavily featured in the doc) and Nicole Newnham, along with editors Andrew Gersh, Eileen Meyer, and Mary Lampson, layer archival imagery with talking-head interviews and a era-appropriate (if a touch on the nose) song selection to create a powerful, joyful impression of a camp that looks fun – shaggy-haired kids radicalizing themselves, finding their voices, finding their people, falling in love for the first time, and figuring out how to advocate for themselves and for others.

Eventually, summer ends and the film drifts from its seeming raison d’etre, the titular camp, to track where its graduates wound up – California, mostly. LeBrecht, who has spina bifida, dreams of becoming the Grateful Dead’s sound engineer. Judy Heumann – a polio survivor turned camper turned counselor, and one of the film’s most potent characters, funny and charging – continues lobbying politicians for change. Still interesting stuff to be sure but I did start to wonder if the film, after such a euphoric beginning, had lost its way. And then the compass points to Berkeley, former campers find each other again and gain new allies (including the Teamsters and the Black Panthers), and the film arrives smack in the middle of an explosive moment in civil rights history. It’s thrilling.

The Infiltrators
Reckless, heroic, or both? Immigration center story told through reconstruction and fly-on-the-wall footage