“They want the girl in the Herald Tribune shirt,” quips actor Jean Seberg (Stewart) at one point in this biopic, referring to her performance in Jean-Luc Godard’s 1960 French New Wave classic, Breathless. But Seberg’s early European career is not the concern of this film, apart from a quick scene from 1957 when she suffered burns filming Otto Preminger’s Saint Joan, when that martyr was burned at the stake. It is one of the many clumsily foreshadowed elements of Benedict Andrews’ film (with a script by Joe Shrapnel and Anna Waterhouse) that renders the tragic trajectory of this woman’s life with a reductive and sometimes frivolous air.

What Seberg is mostly concerned with is the actor’s association with the civil rights movement, particularly the Black Panther Party in the late Sixties and early Seventies, and how she became targeted by the FBI’s COINTELPRO project that aggressively (and often illegally) targeted “subversive” groups. So we have two parallel narratives that thread together. One is of Seberg becoming an activist in the Panther party, forming a relationship with Hakim Jamal (Mackie), and using her earnings and fame to increase the party’s visibility. On the other hand, we follow two FBI agents, Jack Solomon (O’Connell) and Carl Kowalski (Vaughn) as they are handed the task of secretly surveilling Seberg with shadowing and wiretaps. In true Mutt and Jeff fashion, Jack is the idealistic newcomer who questions these intentions, while Carl is the racist asshole who is just cashing a paycheck. Seberg’s role in the movement offers up some interesting observations about privilege vs. reality, but those themes aren’t quite examined in a way that holds much weight.

Seberg’s downward spiral begins when she realizes she’s being watched, and her paranoia (which was absolutely justified) about taking apart phones and looking everywhere for wiretap bugs leads her to eventually attempt suicide by overdose. It was unsuccessful, and although there were later attempts, her death in 1979 was most likely her giving in to the consequences of basically being blacklisted by Hollywood for her beliefs, severe depression, and the haranguing by the FBI to discredit her.

Like I said, a tragic trajectory. And one that I wish were handled with a bit more nuance. Stewart (per usual) is the best thing about the film, but every other character feels like either a role out of a poorly made network procedural (oh look, it’s Colm Meaney as the sputtering and angry FBI boss!) or a silly caricature (I’m looking at you, Stephen Root, as the mildly bumbling PR agent who just wants Seberg to shut up and be a vacuous starlet). Seberg’s life was quite interesting, but alas, this film is not, and that’s a shame, because she was so much more than the girl in that iconic shirt wandering Paris with Jean-Paul Belmondo. 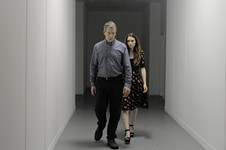 Una
A woman confronts an older ex-lover with devastating results