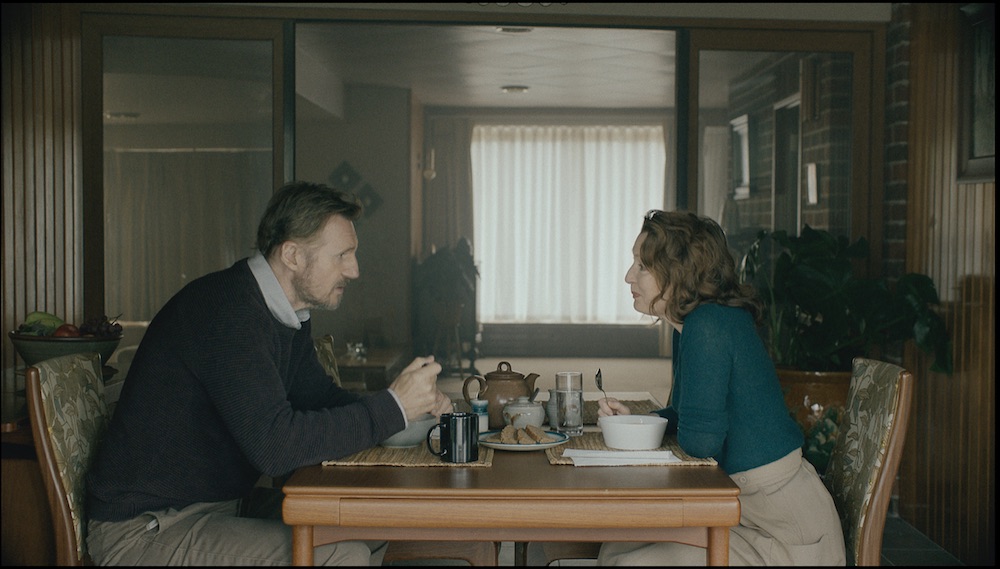 This sensitive domestic drama begins with long-married couple Joan (Manville) and Tom (Neeson) on their regular morning walk. Tom hovers a whole head taller than Joan, but they’re more or less in step – a team. When Joan finds a lump in her breast, Tom reassures her they’ll face whatever happens next together, an earnest if abstract promise that is challenged over the course of a year as Joan progresses from diagnosis to surgery and chemotherapy. Tom’s a good guy, but it’s not their cancer, it’s hers.

Belfast-based playwright Owen McCafferty funneled his own experiences with his wife’s breast cancer into his original script; he and the filmmaking team of Barros D’Sa and Leyburn (Cherrybomb, Good Vibrations) quite effectively dramatize the crushing banality of a serious illness: the waiting rooms, the tests upon tests, the anxious attempts to read meaning into a doctor’s lateness or imprecise language, the hospital parking fees. But Tom and Joan feel somewhat unformed. There’s not a lot imparted about their lives outside of this diagnosis. We glean there’s been a tragedy some years back. An early trip to visit a grave fills in some blanks, but the camera placement distracts from an otherwise movingly written and performed monologue. The cutting back and forth between profile and frontal angles jerks the viewer between competing sensations: From one angle, we’re quietly eavesdropping on someone’s grief; from another, we’re having it performed it to us.

There are other strains at artistic-ness like this – a series of rooms revisited when they are empty, a goldfish that exists so that it may die, a dream sequence that seems to switch from first-person to third-person perspective. These scenes feel a little like busywork, but they don’t detract from the potency of the performances. Neeson, taking a welcome break from his late-career reinvention as a man of action, and Manville (Another Year, Phantom Thread) are such gifted performers, and they play this couple – their tenderness and stress – at a likably subtle frequency. Cold Pursuit
Liam Neeson is Mr. Plow ... with a vengeance