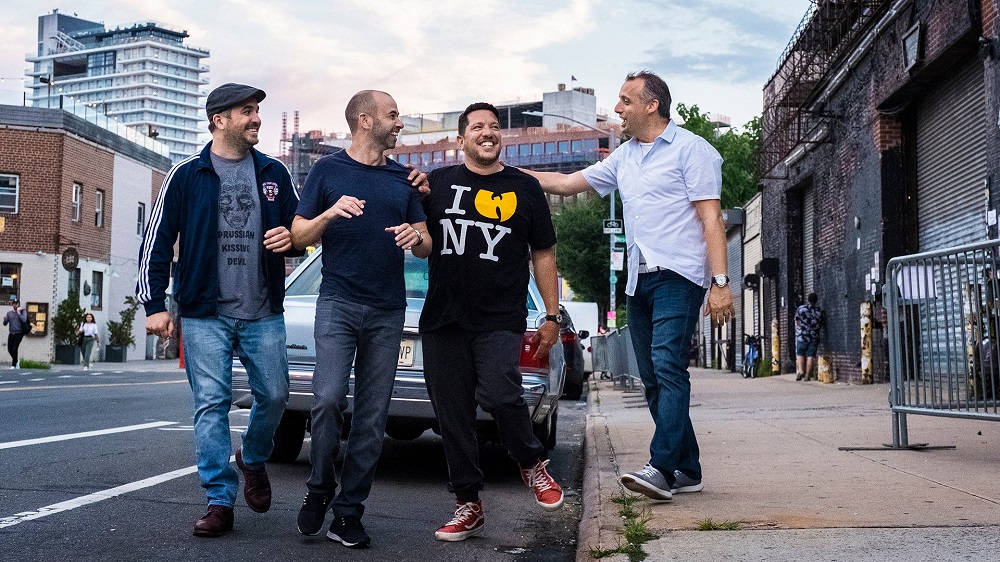 While it shares a similar genetic background with the Jackass goon squad and MTV’s Punk’d, Impractical Jokers is by comparison a determinedly less raucous ruckus. It’s occasionally funnier than either of those two shows/movies, and there’s certainly far less vomiting and outright violence onscreen (or off, for that matter). It’s as if Johnny Knoxville, Steve-o, and Bam Margera’s kinder, gentler uncles got into improv comedy by way of Allen Funt’s classic Candid Camera.

Essentially a big-screen expansion of the long-running truTV series of the same name, Impractical Jokers: The Movie’s low concept is that the four main characters, lifelong pals Q (Quinn), Joe (Gatto), Murr (Murray), and Sal (Vulcano) bolloxed their one big shot to see Paula Abdul back in high school in 1994 and in the process ruined their beloved pop star’s performance that evening. (This chunk of inciting exposition is shown in a goofy flashback.) Cut to today and the merry pranksters are fine-dining it at a Staten Island Red Lobster when who should they spy at an adjoining table but Abdul herself, who doesn’t recall their teenage dirtbaggery but is a huge fan of their truTV program. She invites the motley crew to a gala blowout she’s throwing in Miami but a mix-up leaves the quartet with only three VIP passes.

The horror … the horror.

What else can they do but road trip it down the Gator State while along the way pranking each other in a contest to see who the unlucky non-attendee will be. And that’s about it, plot-wise, other than to say that fans of the show will probably dig the movie while the clueless will leave the theater wondering how these guys have managed a full nine seasons on cable.

There’s a few sharp bits that had me grinning, briefly, such as when one of the boys is made to dress up as a mall Santa (in July) and then befuddles the little ones by dozing off as they tell him their fondest wishes. There was another involving Murr having to read fake eulogies to perplexed visitors at the Lincoln Memorial. But mostly this is a pseudo-reality show cinematic tie-in that falls flat and seems pointless if you’re not already a die-hard enthusiast of the Jokers' television work. Far better to spend 93 minutes on director Henchy’s other and certainly more well-known claim to fame, having co-founded, with buddies Will Ferrell and Adam McKay, the (almost) always reliable Funny or Die website. I could watch the infamous McKay-helmed Ferrell short The Landlord on a loop for 93 minutes and laugh myself into hypoxia, as opposed to the nap Impractical Jokers left me craving.