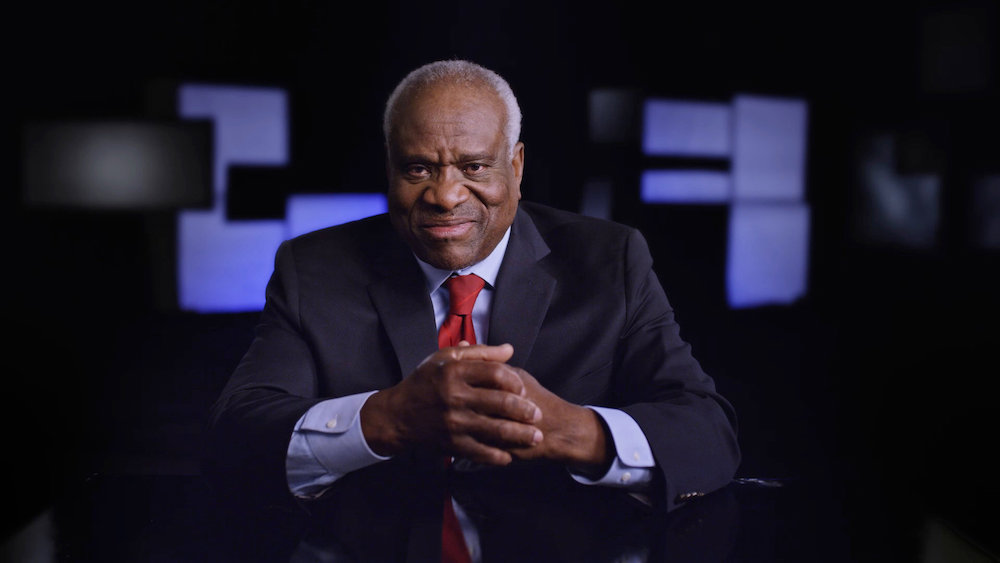 Created Equal: Clarence Thomas in His Own Words

Let’s spot Clarence Thomas this at the outset: He is not obligated to justify to anyone, and certainly not to white people, why he is Not That Black Man – or, as he puts it “in his own words” in this strained video portrait, “the wrong kind of black man” to be allowed to attain power.

This matters here because Created Equal is a monologue and an apologia for the Supreme Court justice’s controversial career, yet also firmly centered on his black life. So the documentary raises the question of how a poor black boy from the Sea Islands in Georgia ends up a political and legal conservative, but then leaves it laying on the table, unanswered in a cloud of Thomas’ grouchy diffidence and reticence.

This is the sort of film made for block-bookings of MAGA church youth groups – Thomas’ wife Ginni floats in and out to drop evangelical code words about the angels and demons warring over his fate. It doesn’t say much about his judicial or political philosophy beyond brief and opaque gestures at “originalism” and “natural law” and a clip of Gary Cooper in The Fountainhead. Thomas starts to articulate a thesis of libertarianism, rather than liberalism, being the appropriate intellectual home of black men scarred by racism, but doesn’t really finish the thought; he speaks of a road-to-Damascus moment and concluding that certain principles are worth dying for, but the movie never lays out with much clarity what those are. Perhaps it’s assumed the audience will view Thomas as a virtuous warrior for God and country and Trumpish stuff, but he also comes off as a friendless misfit and kind of a hotep, the Uncle Ruckus of the Supreme Court.

Thomas has never faced the threat of death for his beliefs, but of course he thinks he has, and Created Equal wades deeply into his martyrdom (and the sufferings of poor Ginni!) at the hands of foolish Anita Hill, wicked Ted Kennedy and idiotic Joe Biden – thirty years later, he’s still clearly not over it and wants the viewers (those MAGA kids for whom this is all new information) to be likewise aggrieved. Thomas’ retelling of his origin story does hold some interest, decorated here by gorgeous landscape shots and archival imagery heavy on the Spanish moss, soundtracked by Johnny Mercer. From the free and joyous rural poverty of tiny Pin Point to corrupt urban squalor in Savannah, young Clarence is saved when taken in by his strict, illiterate yet morally faultless grandfather – an upbringing that sounds grim and traumatic, but laid out here as a precursor to the justice’s admirable stoicism and steely determination. The school of hard knocks tees up his isolation and insensitivity in adulthood; Thomas enters Catholic seminary, quits in the wake of shocking racism, is then kicked out by his grandfather, and looks back on all of this as necessarily formative. He goes through a bitter Black Power phase in college up north, then recoils and literally falls to his knees in repentance. Then he goes through Yale Law bearing what he perceives as the burden of discrimination (he can’t get a good job because he’s black), and onward and upward on what empirically is a meteoric career trajectory but to him is a trail of tears. One wants to reach through the screen at the end of this narcissistic exercise, grasp his shoulders and give him a good shake: “Get a grip, man. You’re Clarence Thomas.”

Created Equal: Clarence Thomas in His Own Words, Michael Pack