The marital dysfunction initially on display in this uneasy comedy about an American family’s disastrous ski trip in the screensaver-perfect Austrian Alps is relatively benign in the way of most relationships, a sum of the myriad irritants a couple learns to endure each day as part of the pact to remain together. Familiarity may not always breed contempt, but it sure can work a spousal nerve from time to time. In this lesser remake of the terrific 2014 Swedish film Force Majeure, minor squabbles about texting and meal schedules snowball into marriage-threatening discord after husband Pete (Ferrell) temporarily abandons his wife Billie (Louis-Dreyfus) and their two preteen sons when a controlled avalanche goes awry and nearly buries them beneath the cascading snow as they sit outside in the ski resort’s dining area overlooking the mountains. After this character-revealing incident, Billie stews in disbelief and anger in reaction to Pete’s shameless act of cowardice (to worsen the offense, he grabs his precious cell phone before running away), while he downplays the potential danger the snow slide posed to the family and (more pointedly) fails to acknowledge that he chose his own safety over the welfare of his wife and kids. From there, the sonic boom preceding each subsequent controlled avalanche sounds as a warning the marriage is in rapid decline, tumbling at great speed toward the bottom of a peak that may become forever insurmountable.

Although Billie’s micromanagement of her family’s life is slightly annoying – and she occasionally channels her emotions in misplaced directions – the movie clearly sides with her, feebly trying to explain Pete’s seemingly sudden egocentric behavior as a midlife crisis precipitated by his father’s recent death. But the latter carpe diem psychology in Jessie Armstrong and co-directors Faxon and Rash’s Americanized screenplay is strained, stranding Ferrell (whose acting chops are limited) in a role that recedes from view next to Louis-Dreyfus’ more sympathetic character, which she masters both dramatically and comedically. A scene in a bathroom stall hysterically demonstrates once again why this razor-sharp actress has few peers when it comes to getting a genuine laugh.

The genius of Ruben Östlund’s original script was its lack of tidy justification for the husband/father’s spineless behavior. Turns out, he’s just an asshole, plain and simple. Whether the movie engages in male-bashing is debatable, but its gender alignment unequivocally tips in favor of the female perspective. No doubt the movie will be online fodder for bruised egos declaiming the inherent bias against white men in today’s culture. (Yawn.) To its credit, Downhill strives to remain character-driven rather than devolve into a jokey take on a delicate premise. Given Hollywood’s rehashed bastardizations of reputable films from abroad, that plaudit amounts to something more than faint praise. 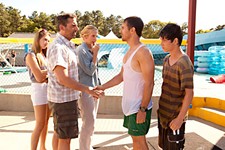 The Way, Way Back
In this indie comedy, a young teen finds confidence at a local water park after suffering emotional abuse from his insensitive, would-be stepfather.