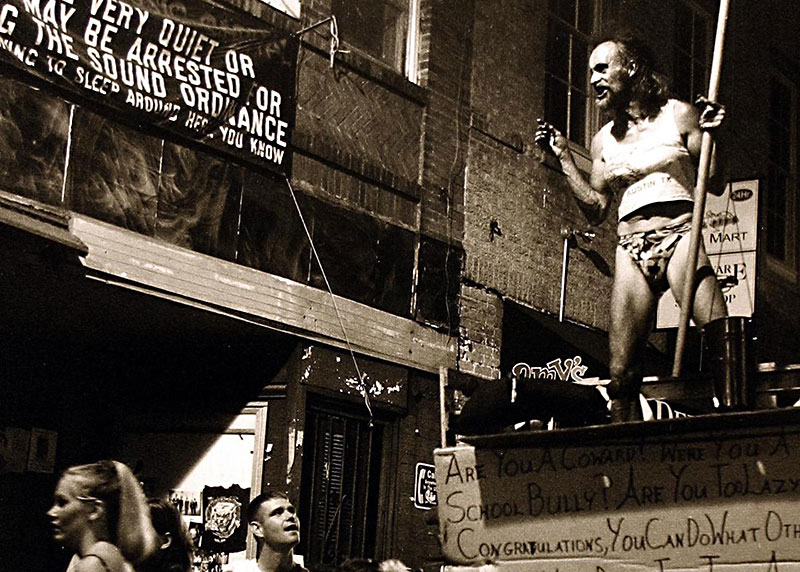 This documentary portrait of well-known Austin icon Leslie Cochran fittingly debuted at the 2019 SXSW Film Festival. The instantly recognizable figure roamed Austin’s Downtown and south-of-the-river sidewalks and businesses, regularly drunk and homeless. But it was his wit and convention-challenging attire that made him stand out. Leslie always wore a thong with a short skirt over it sometimes, women’s heels, fake breasts, and the occasional tiara and boa. Even his chosen non-gendered name Leslie fit with his cross-dressing getups. His fans were legion. To young rebels, Leslie embodied the spirit of “to thine own self be true” or the bumper-sticker sentiments of “Keep Austin Weird.”

Leslie would pick up spare change by performing odd jobs or posing bare-assed for tips from tourists and denizens of Austin’s Downtown nightlife. He acquired some national attention (and income) after paper-doll refrigerator magnets of his likeness were sold as souvenirs, and his name was dropped by a few celebrities while extolling the uniqueness of Austin on late-night talk shows. Becoming Leslie attempts to ferret out the man behind the self-invented myth. Dead in 2012 at the age of 60, Leslie had only lived in Austin the last 15 years of his life or so. Not much of one to talk about himself and his personal history prior to becoming Leslie sometime during his 40s, this documentary fills in some of the blanks of his earlier life for those who choose to learn more about the walking (and three-wheel-bicycle riding) cypher.

First-time director Tracy Frazier pries what little she can from Leslie about his life before coming to Austin. She also gleans information from a few family members, people who befriended him and provided him with temporary shelter, as well as law enforcement figures who would arrest him on drunk-and-disorderly complaints (often for his own protection). Leslie was a provocateur who ran three times for mayor of Austin, and wrote regular diatribes about the city’s treatment of the homeless on cardboard signs. His ass cheeks often displayed such sentiments as “APD, Kiss This.” Thus, it comes as little surprise that Leslie’s sisters comment on his deeply embedded need for attention, as well as the traumatic abuse he experienced as a child and the troubling legacy of being a surviving twin whose mother blamed Leslie for the death of the unborn fetus. His need for attention certainly grew during his flamboyant Austin years, but there is also the part of his life he spent in Seattle and a tiny Colorado town where everyone knew him as “Trapper Al.” Much of the material in the film was also captured by photographer and hairdresser Ruby C. Martin, a friend who would touch up his graying hair.

Like most portraits of icons, Becoming Leslie dips into hagiography, although the film does not seem as worshipful as it is surface-deep. His alcoholism, disorderly conduct, and extensive arrest record are covered incompletely in the film and seem only to add to his popular legend and renegade allure. It seems to me that Leslie was more an avatar of the Make Austin Weird sentiment than its iconic embodiment. Often it appeared as if his fans and gawkers were goading Leslie’s drunken behavior rather than appreciating the eccentricities he made palpable. Before Austin cheerily adopted its weirdness slogan, people were moving to this part of Central Texas because a tolerant community allowed them to let their so-called freak flags fly. In recent years, Leslie allowed people to feel a certain proximity to weirdness without crossing into the danger zone themselves. Becoming Leslie exposes the true price of nonconformity. 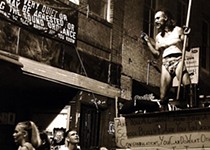