You never forget your first time. Holding a VHS camcorder, I mean. Although I never owned one of those bulky Sony S-VHS monsters with that oversized red record button so proto-reminiscent of Ren and Stimpy’s infamous candy-colored “history eraser button,” I absolutely recall my first Hi8 and, long prior to that, my dad’s old Kodak Super-8mm film camera which once discovered was immediately deployed to stop-motion animate my own Jurassically clumsy tributes to my favorite filmmaker of my youth, the late, great Ray Harryhausen. (I mourn the fact that my 30-second epics of Brontosaur on T. Rex action, complete with crimson gore provided by the 1970s kidhood modeling clay of choice, Caran d’Ache, were forever lost somewhere on the way to adulthood.)

Director Robbins’ enticingly unique VHYes is many things: a Dada-esque assemblage of mid-Eighties era pop culture, a series of often laugh-out-loud bizarro blackout sketches modeled mostly on the television fare of the time, a moderately melancholy love letter to the unexpectedly giddy power of home VHS recorders when placed in the hands of a 12-year-old, and a thoughtful riff on the addictive nature of the ever-voyeuristic camera eye. Mostly though, it’s about the meandering adventures of Ralph (McNulty), who receives the camera as a Christmas gift from his father (an unrecognizable Tim Robbins, the Jack Henry's father) and mother (Allen). Along with his best friend Josh (Braslaw), Ralph takes to taping snippets of everything on 1987 television, from late-night soft-core Skinemax parodies, to a Bob Ross-inspired "The Joy of Painting” with Joan (Kenney in wonderfully full-on disturbathon mode), and an Antiques Roadshow doppelgänger featuring What We Do in the Shadows energy vampire Proksch. In between there’s cut-and-paste scenes of the two besties blowing up cherry bombs, investigating the local haunted house, and just generally behaving like any free range 12-year-old given a license to film.

The beauty of VHYes is that Robbins made the genius aesthetic decision to film the entire thing using actual VHS and Betamax cameras. Given Ralph’s pre-teen attention span, few of the television and commercial parodies overstay their welcome. There’s an inspired talk show bit that mirrors the sequence in David Cronenberg’s Videodrome in which Deborah Harry, James Woods, and “Brian O’Blivion” discuss the ominous future of the rapidly changing televisual landscape. Also scattered throughout Ralph’s tape – which portentously just happens to be his parents' wedding ceremony VHS he snagged on accident – are random moments of his mom and dad and the seemingly downwardly spiraling state of their marriage. This overlays something of a shadow over VHYes’ otherwise chaotic and scattershot in-camera anti-editing. Kudos to child actors McNulty and Braslaw, who give pitch perfect performances as birds of a feather exploring a sometimes hilarious albeit potentially grave new world via the magic of VHS. To quote Videodrome’s aforementioned telepresence O’Blivion, “The battle for the mind of North America will be fought in the video arena … Whatever appears on the television screen emerges as raw experience for those who watch it. Television is reality, and reality is less than television.” And that is, by the end of the 72-minute-long VHYes’ gleefully immersive, intermittently profound “found footage,” a lesson Ralph osmotically absorbs through the VHS viewfinder of his life. 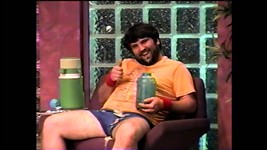