As an island nation, water undoubtedly holds a special place in Japanese culture and in anime, most recently in Masaaki Yuasa's ocean-driven double bill of Ride Your Wave and his mermaid musical eco-comedy Lu Over the Wall. But being an island nation also inevitably means rain, and in Makoto Shinkai's gloriously sodden Weathering With You the complexities of that relationship with droplets of all sizes, from drizzle to downpours – especially in a time of global warming and the threat of constant storms – become more pressing.

Writer/director Shinkai opens the story like the standard Japanese high school drama with supernatural overtones. Yet he quickly pulls the rug from underneath the everyday story of kids in clean white shirts and randoseru, the archetypal Japanese school backpack. Hina (Mori) is a 17-year-old working a part-time job in a burger joint to get by and support her younger brother, Nagisa (Kiryu). Hodaka (Daigo) is a year younger, a runaway from a small town on a small island, adrift in Tokyo, who can only get a job with a Weekly World News-style tabloid magazine with a staff of three – him, his drunken editor Keisuke Suga (Oguri), and Suga's grumpy, flirty assistant, Natsumi (Honda). However, Hina has a secret: she's a sunshine girl who can make the rain magically disappear. In an increasingly drenched Tokyo that's a valuable skill, and in the less-than-booming gig economy that can make for a handy living for two kids surviving on the fringes.

Much like Shinkai's Your Name (the highest-grossing anime of all time), the fantasy component builds into a truly delightful and incisive story about the connections between us all. Yet he doesn't flinch from bitter truths and tough social realities (it's pretty clear that Hina's next option, if sunshine girl and burger flipper don't work out, is working in a hostess bar). More importantly, it's a very subtle and heartfelt warning that there's no such thing as an inexhaustible resource – neither the elements of earth and sky, nor the resilience of the human heart. As much as it's about a girl who can make the sun shine, it's also about ignored kids, single parents, low-paid jobs, and the threat of environmental collapse. Yet Shinkai binds it together so seamlessly and effortlessly that what could readily have been a heavy moralizing slog instead becomes a study of life on the fringes. With its comi-tragic mix of social commentary and sky-bound fantasy, it's got as much in common with Hirokazu Kore-eda's adoptive family drama Shoplifters as it does with anything in Studio Ghibli's catalog. It's also a story profoundly influenced by Shintoism – not as set-dressing or as a bestiary from which to pluck cloud-borne creatures and celestial dragons, but in how it tackles questions of responsibility, sacrifice, and choice.

Part social drama, part high school rom-com, part fairy tale, and part eco-warning, Weathering With You defies simple labels. There's so much nuance, so many subtle components, but they're all bound together in the same way that Shinkai and his animation team depicts the rain. It's not just slate gray skies, but misty sheens, reflecting pools, and the muted tones of seeing the world through low clouds. Rain, he suggests, is something you live with: and, like any constant, it's more about how you deal with it than how it deals with you. The joy and grace of Weathering With You is in how Hina and Hodaka don't reject a world that rejects them. 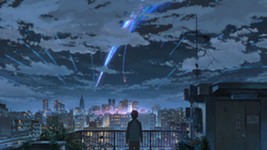 Your Name
This body-swapping anime is a stunner

Weathering With You, Makoto Shinkai