Danger is an addiction. It’s not about reward, it’s about risk. The run along the razor, the looking down into the abyss. If you win, it’s over, and what’s the fun in that?

So meet Howard Ratner (Sandler), a mid-tier jewelry dealer in Manhattan’s famous Diamond District. “District” implies a whole area, like Greenwich or Chelsea, but this is a single block of 47th between Fifth and Sixth. If you’ve ever walked down it, that stretch of sidewalk seems busy, but not insane. But the Diamond District is three-dimensional: Beyond the storefronts, there is dealer after dealer, office after office, private showing room after private showing room. And that’s the realm of Howard, a wheeler-dealer who has a solid business selling stones to ballers and rappers, many of them brought to his windowless store by his assistant/runner/friend-to-the-star Demany. Howard’s a cliche, a wheeler-dealer with a wife (Menzel) and kids in Jersey, and a mistress (Fox) in his apartment in the city. He talks fast, hustles faster, and falls between disasters even quicker.

And he is Adam Sandler’s greatest creation as an actor. He doesn't play Howard: he sweats him out of every pore. In collaboration with writer/director siblings Josh and Benny Safdie (who grew up in the Diamond District and give it vibrant, intimate, seedy life), he depicts a man knee-deep in debt and sinking, much of it to his brother-in-law Arno (Bogosian), and continually hustling, continually gambling, continually robbing Peter to pay Paul, always being hounded by a coterie of Bruegel-esque Diamond District characters (many real people the Safdies know personally). His latest insane scheme is to auction a smuggled uncut opal, which he is convinced will make his fortune. Then he lends the gem on which he has gambled his entire livelihood to Boston Celtics power forward Kevin Garnett (playing himself, as well as appearing in archive footage).

Why would Howard do something so clearly deranged? That’s the key to this incredible character study of a man out of control. Sandler’s Howard is a man in free fall who thinks the wind in his ears is the sound of him running a victory lap. There are so many moments when the Safdies give him an out, even playing up the possibilities of betrayals that turn out to be acts of love. And yet he keeps running, running, running, scamming, scamming, scamming. It’s breathless and breathtaking all at once.

The only term is relentless, and for a lot of viewers Uncut Gems’ third act has been stressful, even traumatic. My response was more one of sheer awe – of the Safdies’ brilliant balancing act, of Sandler’s swirling dance of a performance, and of Howard’s sprint through a minefield. You want him to succeed even though you have every intellectual reason to bet against him; or at least, you hope for his inevitable fall to have some lesson he can learn.

And that’s truly where the Safdies excel. Like a young Scorsese, their stories have a thick moral core without ever being didactic. Like Abel Ferrara, they understand that even the most repugnant antihero is human and frail without ever losing sight of the cost of their sins. With Sandler, they have found the perfect Howard because – rather than in spite – of his comic background. Much as with his still-fascinating performance as the nebbish Barry Egan in Punch-Drunk Love, he knows the point at which a character goes from big to absurd and always keeps Howard on the right side of that line. There’s one whole sequence set around a high school recital that could have, if played broad, fallen out of a mid-Nineties extended-adolescence comedy of the kind that made Sandler’s post-Saturday Night Live reputation. Instead, it’s a tender carnage of the ridiculous.

Uncut Gems is a triumph of building a world and a character that are so infused with each other that they are impossible to separate. It continues the Safdies’ remarkable run as the keepers of the soul of New York cinema, and it’s easy to imagine Connie from Good Time quietly casing one of the district’s store fronts, or Lenny dodging gawking tourists as he sprints for a shift in Daddy Longlegs. Howard is one more character in their story of this naked city, but, oh, what a story his is. 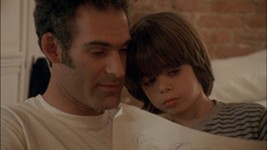 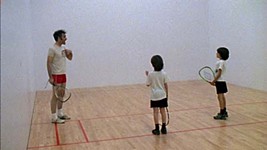